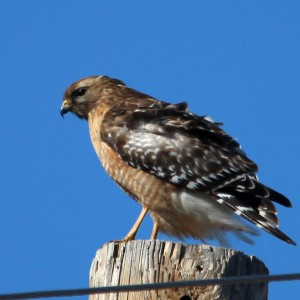 To me there is something clean, crisp about the Red-shouldered Hawk (Buteo lineatus). When you get a decent look at one here in Oklahoma, it is remarkably consistent in coloration to other Red-shouldered Hawks. Nice reddish shoulder and reddish barred breast and much black and white barring elsewhere. This is unlike the Red-tailed Hawk, with plumages that seem infinitely variable.  Thus, seeing and identifying a Red-shouldered Hawk is generally an immediately satisfying experience.

There is one plumage that can be confusing:  the young Red-shouldered is brown, with brown streaked breast and brown and light banded tail, quite similar to the plumage of a young Goshawk, and not too unlike a young Red-tailed Hawk. One winter, from a distance, I saw such a confusing plumage.  A young Red-tailed Hawk could be ruled out due to the darker and less distinct bands on the tail.  It took some hard looking to finally convince myself that this was indeed a young Red-shouldered Hawk rather than a young Goshawk: I finally got close enough with a scope to make out finer points and I am pretty sure I got it right, but it was very far from an easy identification.

I once found a hawk nest in Mineral Wells Park in Guthrie, Oklahoma, that had a banded-tailed bird sitting on it.  For some reason, I said Red-tailed to myself and went on.  I do not remember how many days it took before I realized that no nesting Red-tail should have a banded tail: the bird on the nest had to be either a Red-shouldered or a Broad-winged Hawk. I went back to verify that is was indeed a Red-shouldered Hawk, which it was. Sometimes we can get a bit “breezy” with identifications.

According to Sutton (1967, Oklahoma Birds), the Red-shouldered Hawk nest is placed  “…eighteen to sixty feet up in ‘small’ to large tree.” In the neighborhood where I live nests are usually placed toward the top of an oak tree.  The nests may be placed on an old nest of a squirrel or one of the hawk’s former nests, etc., but usually not the nest from the previous year. Two to four eggs are usually laid—most often 3—and incubation is about 28 days. Since incubation of eggs starts toward the beginning of egg-laying, young from a nest hatch at different times so that there are different sizes of young in the nest as they grow, a very typical pattern for most hawks. This gives the older chicks an advantage of surviving over younger chicks, especially when food resources are slim for the young. This increases the odds that at least some young will fledge.

Sutton (1967) said that the Red-shouldered Hawk “…may migrate into and through state [of Oklahoma] to some extent.” But “observations during the last 30 years [1937-1967] in Tulsa County and during the past ten years in various parts of eastern Oklahoma indicate that the species is present in considerable numbers throughout the year, and we have no evidence either that birds which breed in the state move southward or that more northern birds move into or through the state in fall and winter.”

Bent (1961, Life Histories of North American Birds of Prey, part 1) talks about the Red-shouldered Hawk’s tenacity to its nesting woods; one pair (and possible successors) near Boston, Massachusetts, was believed to have nested each year in the same woodlands from 1872-1923, a total of 51 years, quite a remarkable period of time.

The Red-shouldered Hawk, according to Breeding Bird Survey data, appears to be increasing in numbers and expanding its range in central and western Oklahoma.  The Red-shouldered Hawk is a bird of forests and swamps. Forested habitat in Oklahoma has expanded in the last several decades at least, probably due primarily to fire suppression.