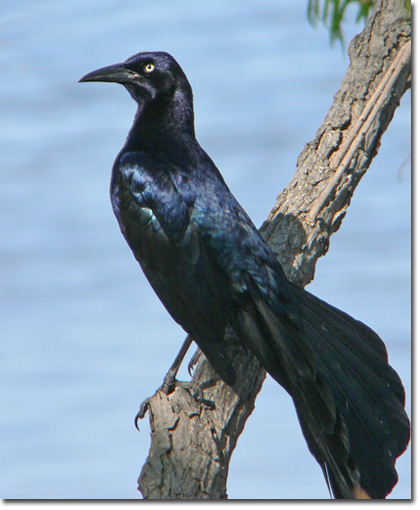 The Great-tailed Grackle (Quiscalus mexicanus) has an interesting history. It was lumped with the Boat-tailed Grackle in 1910 and only split in 1983. The species has spread wildly since it showed up in the Oklahoma in 1953 as the Boat-tailed Grackle. The first Boat-tailed record for the state was reported by Sutton (1967, Oklahoma Birds), et al: they saw a female “with several Common Grackles on the lawn of Central State Hospital, Norman, Cleveland County,” on 28 April 1953. What a difference from today. I can think of only one other species that might have spread more rapidly and in such numbers over the state—the Eurasian Collared-Dove.

For several years, we banded the nestlings of Great-tailed Grackles in cattails at Rose Lake. This was probably in the 1970s. Warren Harden, who had the permit that allowed us to band, once chased down a chick that had flown about a quarter of a mile from its nest. Warren sent the data to the Bird Banding Laboratory in Patuxent, Maryland, and put the bird down as a “flighted” bird. The Banding Lab sent back word that Warren should have put this down as a “non-flighted” bird. Warren begged to differ, but the Band Lab declared the bird “non-flighted.” We have laughed a lot about how this bird could not fly. Incidentally, when banding Great-taileds, there is such a size difference between the larger male and smaller female of this species that males—including young males in the nest–require a bigger band than females.

Sutton (1967, Oklahoma Birds) noted that Boat-tailed Grackles nested in “willows, cattails, or bulrushes over water,” but that they also nested in a variety of tree species well away from water. A few years after our banding in cattails at Rose Lake we started noticing this grackle nesting in town. In particular, we noticed that they were nesting in ornamental Bradford pear trees. This pear blooms and leafs out a couple of weeks earlier in the spring than most other trees. This, I believe, gives the Great-tailed a head start on their breeding season. I speculate that it also allows them to complete, on average, more nestings per year than cattail-nesting birds, which do not gear up for nesting until new growth on cattails makes them strong, about June. We also began noticing that the birds were also found in an area where there were fast food and mall parking lots. Perhaps these fast food places provided them with most of the food they required—french fries, burger buns, etc., plus grasshoppers pried out of the grill of cars.

When studying a species I find it useful to pay particular attention to three types of habitat—nesting habitat, food habitat and escape habitat. I find this especially interesting when talking about our “citified” Great-taileds: Bradford pears provide nesting habitat; food habitat is provided by McDonald’s, Burger King, mall parking lots, etc.; some escape habitat is provided by Bradford pears because they are a relatively safe roosting tree for the grackles, while the Migratory Bird Act, which prevents the hunting of most bird species, decreases the actual need for escape habitat in the first place. Thus, the Great-tailed now has its main types of habitat covered (even “improved,” perhaps, by Bradford pear) in the middle of towns. I have not been watching very carefully if this grackle still nests frequently in cattails (if anyone knows I would very much like to hear about it), but I suspect a major shift in all or most of their populations, toward a “citified” species. I have even toyed with the idea of studying the proximity of Bradford pears, McDonald’s (and similar other fast food opportunities), and Great-tailed populations to support or refute this possibility.

This possible major shift, “citification,” in the behavior of at least some Great-tailed Grackles raises another question: will the citified grackles evolve into a new species? Warren Harden has told me about Temple Swallows in India that now will only nest in man-made temples. Does anyone know of a Chimney Swift that has not nested in a man-made chimney? It will be interesting if one day the name of the Great-tailed is changed to Bradford or McDonald’s Grackle because of the evolutionary changes that occurred as they moved to cities.