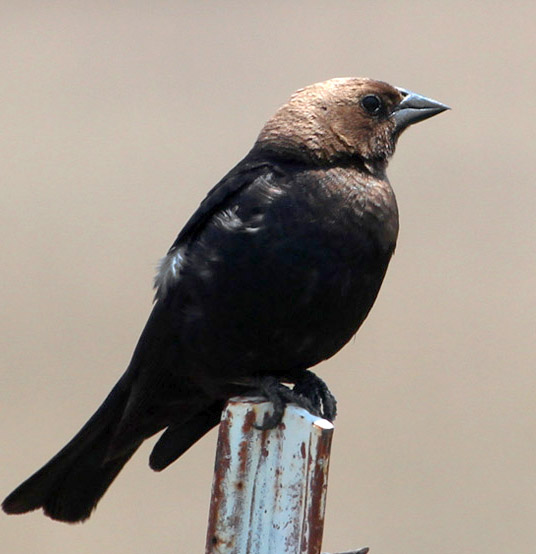 The Brown-headed Cowbird (Molothrus ater) does not have the best of reputations among most bird people, but I know of at least one biologist in Oklahoma who has a grudging respect for the species—because it is so successful at what it does.  The objection to the species, of course, has to do with the cowbirds’ lifestyle of laying its eggs in other species’ nests—nest parasitism—usually to the detriment of the foster species’ own young.  There is so much to say about the cowbird that I will write this month’s column, as well as next month’s, on the species.  This month I will focus on the basics of cowbird biology, and next month I will focus on the cowbird as it relates adversely to several species.

One cannot do much reading about the cowbird, including Bent (1965. Life histories of North American blackbirds, orioles, tanagers, and allies), without running into the name of Herbert Friedmann.  He published a major work on cowbirds in 1929, “The cowbirds.  A study in the biology of social parasitism.”  In this publication he names all the species he was aware of at the time that were victimized by the cowbirds.  He added further victims he became aware of in later publications, in 1931, 1933, 1934, 1038, 1943 and 1949.

According to Friedmann, the cowbird migrates by day, in the morning and evening.  Friedmann, in the northeastern U.S., worked out the sequence of cowbird arrivals for that area.  Although the specific dates he gives would not be applicable for Oklahoma, I do believe we could learn something from the specifics of the sequence of arrivals in the spring in the northeast:  it entails six steps.

Much of this sequence was worked out by collecting cowbirds; male testes were then measured and female ovaries were checked for the number of discharged follicles.  Using such information, Friedmann believed that the females lay about the same number of eggs as other birds—about 4-5—but he could not state this with certainty.  Female cowbirds apparently lay one egg a day.  Most parasitized nests receive only one or two cowbird eggs; often when more than one egg is found, differences in the markings on the eggs suggest that 2 different females were responsible.  On the extreme end, Bent (1965) gives two examples of eight cowbird eggs in a host’s nest.  One of these birds was a Willow Thrush (Veery), having two of the host’s eggs and eight cowbird eggs; the other was a[n Eastern] Towhee nest with one host egg and eight cowbird eggs.

The Latin name of the Brown-headed Cowbird does not relate to the species nest parasitism.  According to Joel E. Holloway’s book, Dictionary of Birds of the United States, Molothrus means “a greedy beggar,” which is a reference, apparently, to its feeding behavior, and ater is Latin for “black, dark colored.”  But its common name is cowbird, which comes from the fact that it can be found feeding near, and sometimes on, cattle; before there were cattle on the Great Plains, there were buffalo, and it is believed that previously the cowbirds followed the buffalo herds.  It is supposed that at one time cowbirds built their own nests, but as it associated more and more with roving buffalo herds on the Great Plains and elsewhere, and in order to keep up with these huge, roving herds, it developed the alternative technique of laying its eggs in other bird species’ nests, freeing the cowbirds—without further parental duties—to wander from place to place with the buffalo herds.

The Brown-headed Cowbird is found over most of the U.S., but there is a particularly “rich vein” of population which extends from Canada (a little way north of North Dakota) down through the Great Plains to Texas—and right over central Oklahoma.  If I am reading some Breeding Bird Survey data on the cowbird correctly, its populations have been in a positive direction over several decades.  There can be little doubt that man’s activities—especially in our part of the cowbird’s range—have benefited the species:  we have caused the intermixing of trees and grasslands into smaller units than they were in past centuries, making habitat that can support more cowbirds.  These changes of habitat by humans are working their way westward; even in the Black Mesa area of Cimarron County it seems to me that the cowbird population is slowly gaining a firmer foothold than when I first visited the area in the 1960s.

Host birds have ways to counter cowbird nest parasitism.  Some birds will throw cowbird eggs out of the nest, others will abandon that nest and build a new one; the Yellow Warbler has been known to build up to five (layers of) nests, one atop the other, in an effort to bury cowbird eggs laid in the bottom of the warbler’s nest.

When I first moved to Oklahoma, in 1958, I used to see several breeding species that I no longer—or rarely—see nesting in central Oklahoma.  In digging through my files, I found some Breeding Bird Survey (BBS) data, for all of Oklahoma survey routes, that showed a drop in certain species numbers that I suspect relate to cowbird parasitism; the data covers the BBS surveys from 1967 to 1981 (for some species) or 1984 (for others).  These included Lark Sparrow, Field Sparrow, Painted Bunting, Bell’s Vireo and Orchard Oriole.  Interestingly, cowbird numbers over this same period had also decreased significantly; perhaps the cowbirds were running out of easy “victims.”  Other species that I suspect have been affected by cowbird parasitism in central Oklahoma, but that I have not run BBS numbers on are Baltimore Oriole and Indigo Bunting.  Several species have pretty much disappeared from central Oklahoma.  I used to see Baltimore Orioles nesting in the area, particularly around Lake Overholser but no more.  Although I do not have a clear recollection, I believe I also used to see Orchard Orioles.  I used to see Lark Sparrows nesting in area cemeteries.  Bell’s Vireos’s nest used to be relatively easy to find, but now they are usually restricted—to my knowledge—to Nancy Vicar’s ears!  One bird I used to see in tall cottonwoods below the Lake Hefner dam was the Yellow Warbler, but no more; Nathan Kuhnert tells me experts do not agree on the cause of this species decline along the southern edge of its range, but cowbirds may be at least part of the problem (thanks to Nathan Kuhnert for his input on several of the species covered).

In Oklahoma there is one huge success story against cowbird parasitism and that is with efforts to help the Black-capped Vireo in the Wichita Mountains and on Ft. Sill.  I do not know the specifics of when Black-capped Vireos were first noted in the Wichita Mountains; Dr. Sutton [1982, Sutton summaries of bird species records] included a record from there in 1962.  An extensive amount of cowbird trapping has been done on the refuge and on Ft. Sill, I believe, for about the last 25 years, and now there are estimated to be between 2,000-3,000 pairs of Black-caps in this area—quite a turnaround!  I believe people should be keeping watch for some of the Black-cappeds to spread out into new areas, away from Ft. Sill and the Wichita Mountains.  At Ft. Hood, in Texas, I believe they have had similar success with trapping cowbirds:  there not only the Black-capped, but also the Golden-cheeked Warbler, have benefited greatly.

The type of cowbird trap used in the Wichita Mountains has been a cage about 10 or so feet square on the bottom and about 8 feet high, made of small mesh chicken wire and 2×4 lumber.  A funnel-shaped entryway into the trap is fashioned in the middle of the top.  This guides cowbirds into the trap through the funnel, but the cowbirds normally cannot then find the way out.  The traps are usually “baited” with a cowbird or two to help draw other cowbirds in.  Placement of these traps is usually fairly close to cattle or other big animals, like bison. Trapping cowbirds in areas where host species are being adversely affected appears to be, so far, the most successful “antidote” for protection from cowbird disruption of hard-pressed host species.

Getting back to cowbird biology, Nancy Reed asked me an excellent question:  How do fledged young cowbirds switch over from being fed by the host parents to severing this tie and feeding themselves and then forming groups with other (young?) cowbirds?  This sounds like a doable research project for someone to get answers—by using telemetry as part of the research!