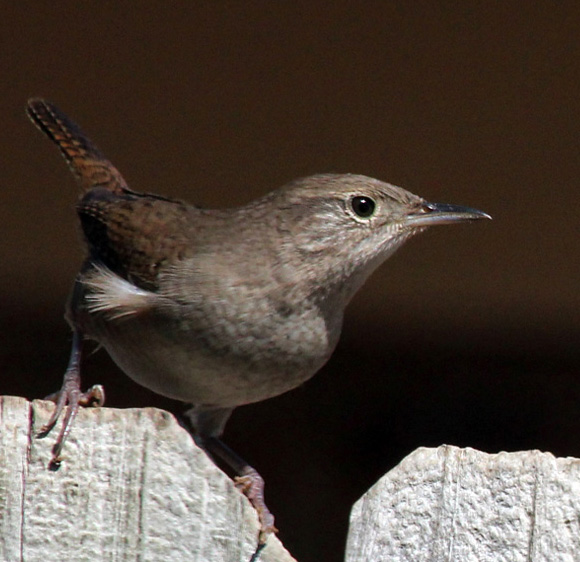 The House Wren (Troglodytes aedon) is a fairly frequent migrant through central Oklahoma during spring and fall, although it does not advertise itself well.  But during winter and the breeding season, it is a “just barely” bird.  Just barely does it reach central Oklahoma in the winter; we are on the northern fringe of the wren’s range in winter.  On our Christmas Bird Count we usually see one about every 2-3 years.  During this last Count, Nathan Kuhnert found one in the vegetation at the north end of Lake Overholser.  Since our Count is in early winter, there is no guarantee that this particular bird hung around for the rest of the winter.

In summer, it just barely reaches central Oklahoma, on the very southern edge of its breeding range, although it can be found more commonly in summer than winter.  Diane Newell, and before that her father John Newell, has one nest in a box in her yard about every summer.  If you really look, there are a few around, particularly in towns.  I think the magic habitat for them this far south is well-watered, luxurious, vegetation that now grows up around well-tended yards in our towns and cities.  I believe it was Dr. George Sutton’s opinion that summer-time heat is the limiting factor on the wren’s breeding range, coming southward.   It just gets too hot, especially in nests with young, to allow the birds to rear young successfully.

I was once very pleased to find a noteworthy nest—because it was so far south—in Duncan, Oklahoma, in the south central part of the state.  I do not know what got me to looking, but I found a House Wren in a yard there and eventually found, in the middle of a front yard, a nest hole in a mimosa tree, of all places.  Clearly, some other bird, probably a Downy Woodpecker, had drilled the hole during a previous year, and the wren used it in this later year.  As I recall I could verify only 1 nestling—I do not even remember how I determined that.  Perhaps I saw it at the entrance hole when the adults came to feed the young.  Summer-time heat may have gotten most of the brood.

Then I got to looking around in the surrounding blocks of Duncan and came up with another singing House Wren a couple blocks away.  It was in a back yard that had nice habitat—in the way of watered plants and garden vegetable plants.  The wren had apparently tried to start a nest, based on sticks that protruded from the entrance hole of a nest box there.  But I never picked up any evidence that the nest box was actively being used:  a single male house wren will start several dummy nests from which the female makes its final selection for its real nest.  Later, when checking with the owner of the yard, it turned out to be the yard of Frances Neeld and her husband, longtime members of the Oklahoma Ornithological Society:  what a coincidence!

Many years ago (maybe 1985 or so) I had an interesting encounter with House Wrens in the northwestern part of the state.  I was making a checklist of Panhandle birds for the Oklahoma Department of Wildlife Conservation.  Just barely inside the eastern edge of the Oklahoma Panhandle, and I do mean “just”:  if you go west out of Laverne, Oklahoma, about 5-6 miles you will have a highway course correction, a section correction, as you enter the Oklahoma Panhandle.  Within a quarter of a mile inside the Panhandle, you will come to a huge plot of wind breaker trees, most of them silver maple trees I believe, along a usually dry creek course.  I started hiking south in this extensive patch of trees and I began hearing House Wrens singing.  I walked maybe one-third mile and in this distance I heard maybe 30-40 of them!  Never have I seen the likes of this number anywhere else; it occurs to me that it may have been the most concentrated population of House Wrens anywhere in the wren’s range that year.  One caveat:  rather than nesting birds, it could have been a concentration of House Wrens still in migration—I do not remember the date.   I have not checked this area in many years, but I suspect it is still full of House Wrens.

The House Wren usually lays 6-7eggs, although it can vary from 5-8.  The species is known for nesting in a number of unusual places, such as pockets of clothes hanging outside (scarecrows, clotheslines), tin cans, flowerpots, and in the engine of unused cars–sometimes even around the engine of used cars.