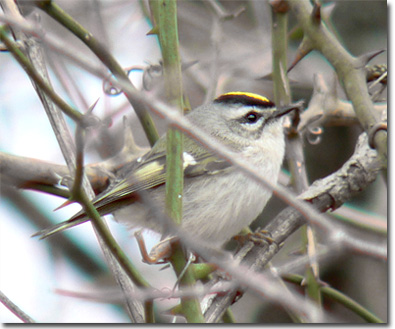 Golden-crowned Kinglets should be arriving in Oklahoma about now, from their breeding grounds to the north. Have you ever seen a male Golden-crowned flare the bright yellow and gold of its crown as you look through, say, a 10X binocular? Such a look at beauty will not soon be forgotten by most observers.

One thing that helps identify the Golden-crowned Kinglet is the series of two or three high thin call notes given together—“zee-zee” or “zee-zee-zee.” This call is very similar to the “zee” call of the Brown Creeper, but the Creeper gives only one “zee” at a time. At the very moment I need to remember for sure which gives one zee (Creeper) and which gives two-three (Golden-crown) my memory usually fails—so I’m writing this down here as much for me as for anybody else. The call of the Golden-crowned is high enough that it is beyond the hearing range of some who do not hear high tones well. The Ruby-crowned Kinglet makes a lower, burry, “chi-dit,” quite different from the Golden-crowned’s call.

Although the Golden-crowned nests no closer to Oklahoma than the mountains of central New Mexico, I am taking the liberty to discuss several points you may find interesting about its nesting that A. C. Bent discusses (in Life Histories of North American Thrushes, Kinglets, and Their Allies, 1949).

I was surprised to learn something about this kinglet’s nest that I cannot recall ever reading or hearing before. Bent quotes Brewster in saying that “The top of the nest is open, but the rim is slightly contracted or arched on every side over the deep hollow which contained the eggs.” This makes a nest similar to an Ovenbird, but the arched-over part arises from the sides so that the top is where the opening is, not the side of the nest as in the Ovenbird. The Golden-crowned nest resembles, if you will, Beijing Olympic Stadium, with the roof arching over from the sides. Such an arched-over design helps to shed rain and sun away from kinglet eggs, much like the arching-over of Beijing Stadium—the “Bird’s Nest”—helps shield spectators from rain and sun.

Also a surprise to me from Bent is that the Golden-crowned lays from 5-10 eggs, but probably most commonly 8-9. This is enough eggs that given the small size of the interior of the kinglet’s nest, two layers of eggs—one on top of the other—have to be deposited. An apparent further result of this double layering of eggs is that a very tight nest is built to hold in heat, so that all eggs have a chance of being properly incubated until hatching. To finish up about nesting, Golden-crowneds usually build their nest maybe 40-60 feet high in an evergreen, but Bent reports one nest to be only 4 feet high.

Another interesting point Bent discusses is two instances of Golden-crowned’s tameness, to the point of allowing capture. One occasion was in Michigan, where 8-10 Golden-crowneds invaded a boat, and before long, found their way into the boat’s cabin, attracted there by flies. One person caught flies that the birds would take from his hand. Eventually the birds grew so tame as to allow capture by hand and “…manifested no fear, but lay quietly and passive.”