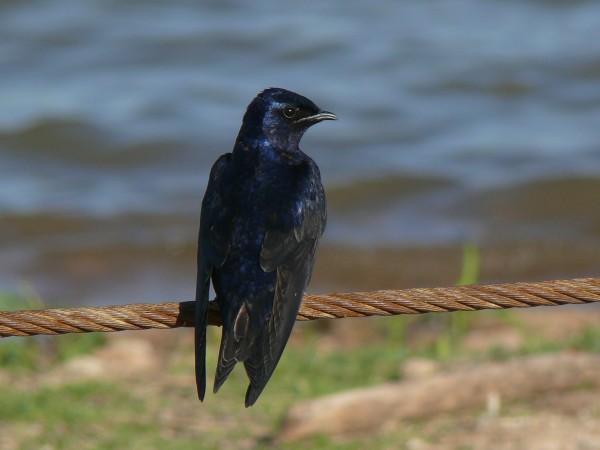 Most of us who have grown up in the eastern U.S. learned that the arrival of the American Robin and the Eastern Bluebird were signs of spring. Problem is that for most people in the eastern U. S.—and certainly us Okies—both of these birds are here year round. The Purple Martins (Progne subis), on the other hand, do winter south of us and its arrival is a true indication of spring. Today (6 April 2009) I just watched about 10 martins swooping over a pond in our neighborhood. Most were blue-black males but at least one had the grayish underparts of a female. I know of no martin houses nearby, so I suspect these were migrants. According to “A Check-list of Oklahoma Birds” (G.M. Sutton, ca. 1974), earliest arrival dates for Purple Martins in Oklahoma begin in February. Male usually show up a week or so earlier than females. Some of the early arrivals risk starvation, should several days of cold weather shut down their food supply, primarily of (true) insects and spiders.

Initially, before humans got involved, Purple Martins nested in natural crevices in rocks and cavities in trees, such as those drilled by woodpeckers. Often multiple holes in a tree are drilled by woodpeckers and this would have been advantageous to the (usually) colonial nesting martins. The tradition of drawing in Purple Martins with birdhouses goes back at least to Native Americans, who hung several “birdhouse” gourds on poles to attract the martins. But now all, or almost all, martins nest in birdhouses supplied by man; multiple compartment birdhouses can draw in whole colonies of martins. As to placement of nest boxes, open lawns, with nest boxes placed in an area with few trees nearby, usually will attract the martins. Water nearby is probably also a plus because of the increased supply of insects associated with the water. Martins only rear one brood, although they will relay eggs if the first batch is lost; they lay up to 8 eggs, but 4 or 5 are the usual number.

One reason to attract the birds near human habitations is to decrease mosquito populations around the nest colony: the martins are fun to watch while they lower a yards mosquito population. Someone once noticed Purple Martins trying to pull bits of oyster shells from a stucco wall, and when that person scattered egg shells near martin nesting boxes the birds began picking them up almost immediately. The calcium in the egg shell is probably the ingredient desired, possibly because there is a lack of calcium in the matins’ diet of insects (this is a guess only).

Very soon after nesting—July-August—the martins begin gathering in huge flocks to roost, and they leave for points south—some to Brazil—not long thereafter. If I am remembering correctly, these roosts, and the birds coming to or leaving them, are so thick with martins that large roosts show up beautifully on weather radar, creating impressive bird “storms” in morning and evening. This is one way to locate huge premigratory flocks of martins in August. Most martins are gone by September, the stay of many of them in Oklahoma being only about 6 months or so.