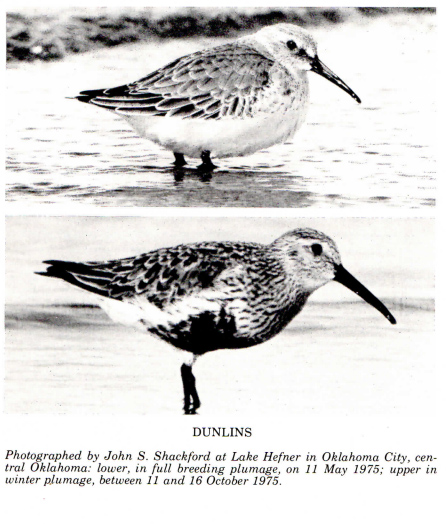 The Dunlin (Calidris alpine) is an interesting Oklahoma bird.  Calidris was a name Aristotle (no less!) gave to speckled waterbirds and alpina is a “reference to this bird breeding in alpine or cool areas” (Holloway, J.E. Dictionary of birds of the United States, 2003, Timber Press, Inc., Portland Oregon).

Some migratory birds, in their distribution, have a way of making the world a little smaller place.  To me, the Dunlin is one such bird species—it “shrinks” the northern hemisphere considerably.  It has a circumpolar nesting range, including northern areas of North America and northern areas of Europe and Asia.  It migrates southward in winter to the southern oceanic coasts on both the North American and Eurasian coasts southward to northern Africa.

Many years ago I wrote an article entitled “The Dunlin in Oklahoma” for the Bulletin of the Oklahoma Ornithological Society (1977, vol.X, no. 1).  The article was illustrated with two black-and-white photos that I had taken, developed and printed; they are the photos you see reproduced here, illustrating the difference between breeding and nonbreeding plumage.

Breeding plumage of the Dunlin is very distinctive, the only North American sandpiper with a black breast; it is thus very easy to identify in the spring.  Most bird species are darker above and lighter below, but the Dunlin in breeding plumage is an exception.

But Dunlin identification in winter plumage is something different, at least for me.  I remember many years ago struggling over the identification of a Dunlin that I was hoping would stay around until our Christmas Bird Count (CBC).  It was on the pond behind what is now John Marshall School.  It was a lone bird on a broad shoreline with very little to compare its size to.  The best clues, as I recall, were the somewhat decurved bill and the slightly larger size than that of a Least Sandpiper.  I finally got the bird identified sufficiently that I was comfortable with the identification, but the bird left a few days before that year’s Christmas Bird Count.  Nonetheless, the Dunlin is very hearty, as attested to by how far north it breeds, and also by the fact that it winters well north of most other sandpipers, even up to Oklahoma on rare occasions.

In migrating spring and fall, it is a relatively rare migrant through Oklahoma. Nice (1931:94) called it a “rare transient.”  Additionally it is an “occasional transient visitor,” Salt Plains National Wildlife Refuge (Sutton, 1967, Oklahoma Birds); Sutton gives the dates of occurrence in Oklahoma as “September 3 to December 9, and from May 8 to 31”.  The Date Guide to the Occurrences of Birds in Oklahoma (Grzybowski, 2009) gives the dates from October 9 to May 31 in all parts of Oklahoma except the Panhandle, where it normally does not occur.

In an effort to try to understand the species little better I went to Breeding Bird Survey (BBS) data.  But there I found, apparently, that the Dunlin breeds so far north that they are north of most, if not all, BBS routes, as none showed up in the data.  The bird may have a good defense against losing nesting habitat to human intrusion—nest well north of most humans!

I then checked the Audubon Society’s Christmas Bird Count (CBC) data to try to define the species relationship to Oklahoma a little better.  According to rangewide data on U. S. CBCs since 1967, the number of birds seen per party hour has remained fairly stable, a suggestion, I believe, that the population itself is fairly stable.  This steadiness likely reflects mostly trends along the Atlantic and Pacific Coasts, where the species is much more common, but I do not believe that it sheds much light on smaller populations that migrate through Oklahoma. So to me there is something of a mystery as to how prevalent the species now is in the state and what its population trend over time has been for Oklahoma.  So try to watch for this species this fall, as migration progresses.  I would be most interested in hearing any reports of the species in our area this fall and winter.

As mentioned above the species nests far to the north in North America.  It usually lays 4 eggs, typical for shorebirds, but sometimes 3 or 5 eggs, in a nest usually formed in a tussock of grass, the lining of the nest being grass stems and the like.