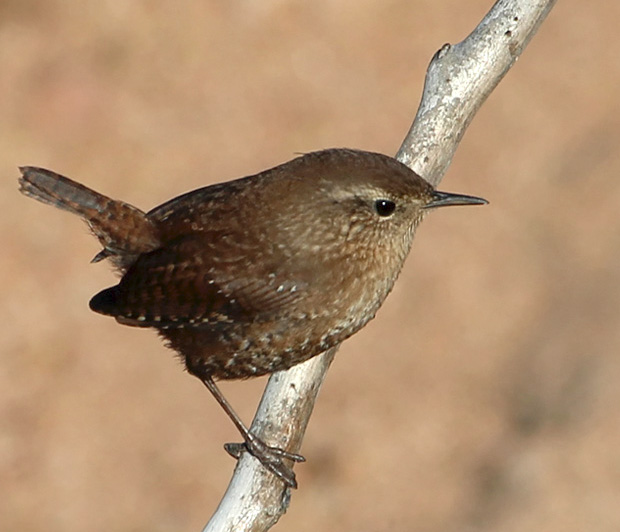 In checking on the taxonomy of the Winter Wren (Troglodytes troglodytes), I found that it is the same species as the Eurasian Wren:  both are T. troglodytes.  Here we have two widely used common names for the same bird.  This is the kind of ambiguity that Linnaeus was trying to avoid with his Latin genus and species naming system.  Interestingly, this fact—that Winter/Eurasian Wren are the same bird—does not pop out readily in the online (nor probably the written) literature.  It took me a while to find a map that showed its worldwide distribution.  This wren no doubt has one of the largest worldwide ranges of any bird species, found at some time of year in much of North America and Eurasia and also a little in northern Africa.

Interestingly, there is only one species of wren in all of Eurasia—the Eurasian Wren—while there are many species of wren in the Americas.  The bridge in the range between Eurasia and North America populations of Winter/Eurasian Wren was probably from Alaska to Russia, as this is a relatively short hop in comparison to the journey across the Atlantic Ocean.  Because there is only this one wren for all of Eurasia and there are dozens of wren species in the Americas, wrens species probably originated in the Americas and the Winter Wren spread from Alaska into Russia and beyond.

The Winter Wren is one of our smallest species, excepting hummingbirds. Bent (1964, Life histories of North American nuthatches, wrens, thrashers, and their allies), in his opening comments about this species, has a wonderful description:  “…it is a furtive little mite, the smallest of its tribe, creeping mouselike about our wood piles or brush heaps, under the overhanging roots of trees along some woodland stream, or under the banks of marshland ditches.”

The Winter Wren is decidedly rare in Oklahoma and only found in winter.  If my party sees one on our Christmas Bird Count, it is usually near the North Canadian River, south of N.W. 10th Street (below the Overholser Dam a little way).  We frequently run into one in some of the thickets not far from the river.  This last CBC Terri Underhill found one north of N.W. 10th; we got into a great spot with lots of birds.  I got a brief glimpse of the wren, but I was furiously writing down all the species of birds Terri was seeing and hearing; Terri has phenomenally good eyes and ears.  Birding with her is a revelation!

One of my favorite CBC stories of a Winter Wren was a find by Warren Harden many years ago.  We were working a wooded area in the northeastern part of the count circle, and it was so late in the evening you could hardly see.  Warren said, hey, I think I just saw a Winter Wren go into that brush pile!  It was so dark, I was a little bit skeptical, but of course the wren popped out soon to prove me wrong.  (After many years of knowing Warren, I have learned that if we disagree on any subject, I better reexamine my own position first—this is no joke!)  I think Warren’s wren was the only Winter Wren for the count that year.

As a nesting bird in North America, the Winter Wren nests in a band across Canada and south into the U.S. a little way, mainly in the mountains of eastern North America.  It usually selects locations near the ground as nesting sites, locations like the upturned roots of blown-over trees, around old stumps, or under the roots of trees.  Usually such sites are well covered with moss and the nests are hard to find because they so closely match the surrounding vegetation.  It builds a rather bulky nest for such a small bird and lays 4-7 (usually 5 or 6) white eggs that have some brown spotting.  Also, they will build dummy nests that are not used for nesting, at least that year.