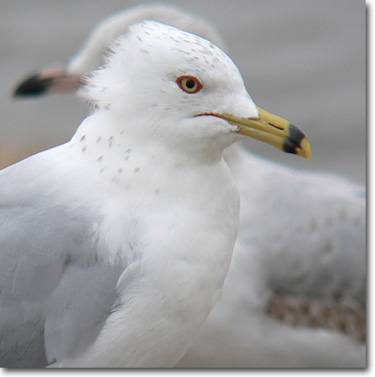 The Ring-billed Gull (Larus delawarensis) is one of our most common winter birds, at least by Christmas Bird Count standards. At a total of 10,936 birds, Ringbills were the most common species recorded on our 2009 Christmas Count, with Starlings, at 4,896, in second place. Counting gulls is relatively easy, given their relatively large size, flocking behavior and a usual tie to water or dump.

In his “Life Histories of North American Gulls and Terns,” A. C. Bent reported that Audubon (1840) referred to this species as “The Common American Gull.” Formerly, this gull—nesting broadly across Canada and some northern interior states—often extended its breeding range to northeastern states and Canadian provinces along the Atlantic coast. But Bent stated that the species is “now mainly restricted to the interior, in the lakes of the prairies and plains of the Northern States and Canada, where…it is still the common gull”.

It is easy to “discount” gull species a bit. (I am embarrassed to admit that when I went to my Bent life history book, the book looked like it had never been opened.) Part of the discounting of gulls may relate to frequent interbreeding among certain gull species: there are 19 gull species of the genus Larus. “Lumpers” (those who tend to minimize the number of bird species, especially when interbreeding is common) might argue that the number of gull species should be reduced significantly, so extensive is the interbreeding of many gull species. At a minimum, it causes many observers (including me) to take plumage “aberrations” with a grain of salt, rather than trying to assign a name to every individual gull seen.

Part of the “discounting” of gulls may also relate to the lack of coloration in the plumage. You can draw almost any adult gull plumage with just a white piece of paper, a big black pencil and an ever so tiny brown pencil, because almost all adult plumages have only black, white and shades of gray, with only a bit of brownish sometimes worked in. Subadult gulls do often have dark brown in the plumage. Two rare exceptions to this white/black/gray “rule” of adult plumage are the pinkish “bloom” that occurs on the breasts of some Franklin’s and Ross’s Gulls in spring.

Colors of bills, feet and eyes—usually composed of some combination of yellow, red or black—are often helpful in identifying gull species. I wonder if the relatively small amounts of these colors may also be important to the gulls in identifying others of the same or a different species. The adult Ringbill has a yellow bill, circled by a black “ring” near its tip (as the name indicates).

In Oklahoma we know the Ring-billed Gull primarily in wintertime. On the breeding grounds they nest in colonies. Nests are constructed on the ground along beaches and shores. According to one report in Bent, Ringbill nests were composed of “dried grasses and weeds, sometimes small sticks…lined with finer grasses and were often decorated with feathers.” Ringbills lay 2-4 eggs, but usually 3, that hatch in about 21 days.

This gull can often be found scavenging garbage dumps, including refuse in shopping mall parking lots. Perhaps the lack of aesthetic appeal of dumps is another reason we tend to “discount” gulls. Other—more traditional—fare of this gull includes fish in winter and, according to Bent, “worms, grubs, grasshoppers, and other insects” in the nesting season.