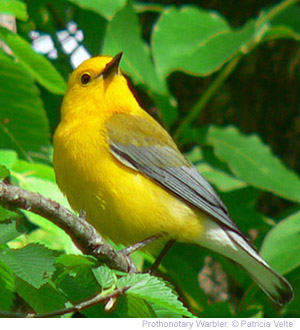 The Prothonotary Warbler is a beautiful ray of “sunshine” in watery woods. A.C.Bent, author of the old standard, Life Histories of North American Birds, maintains that the Prothonotary is a poorly named species, a botching of naming rules accurately but poorly applied. It should be the Golden Swamp Warber, he maintains.

In reading Bent I was surprised to learn that this warbler has been reported west to central Oklahoma (Norman and Oklahoma City) since before Bent published his account of the species in 1963. This means we have had this warbler in the area for at least 50 years or so. I suspect this information came to Bent from Dr. George Sutton in the 1950s: Dr. Sutton came to Oklahoma in 1952 I believe.

This warbler differs from most warblers in its nesting habits. It and the Lucy’s Warbler are the only ones in North America that use a hole in a tree—often an old woodpecker hole—for nesting, rather than nesting in the open air. It is, however, one of those species that still shows signs of a previous history of nesting in the open air; it frequently will nest in holes that have no roof. This seems to be an ongoing evolutionary change.

Many years ago John Newell of our club started putting up Prothonotary boxes at Lake Overholser. Over a number of years he worked on his design, trying to increase the odds of positive nesting success for the warblers. He started including a little sceening near the top on each side of his boxes, to help decrease the temperature as hot air built up inside during hot Oklahoma springs and summers. Knowing John, I am sure he kept records of the nesting success of his boxes, positive feedback as to how well his design was working. One particularly interesting story occurred in what is now the Stinchcomb Wildlife Refuge in an area about half a mile north of NW 39th Street.

John had hiked out into the water 30 feet or so to put up one of his boxes in its usual spot. Then he turned to get back to dry land. Before John reached shore a Prothonotary Warbler came and entered the just-erected box. Apparently this particular bird was eagerly waiting the arrival of the box, remembering precisely where it had been the year before. What a memory!

Jim Bates and his son John have taken over setting up John Newell’s boxes in Stinchcomb Wildlife Refuge. The Prothonotary usually uses moss in making its nest. The female then lays 3-8 eggs, but usually 4-6. We are lucky to be able to list this as one of our nesting species.