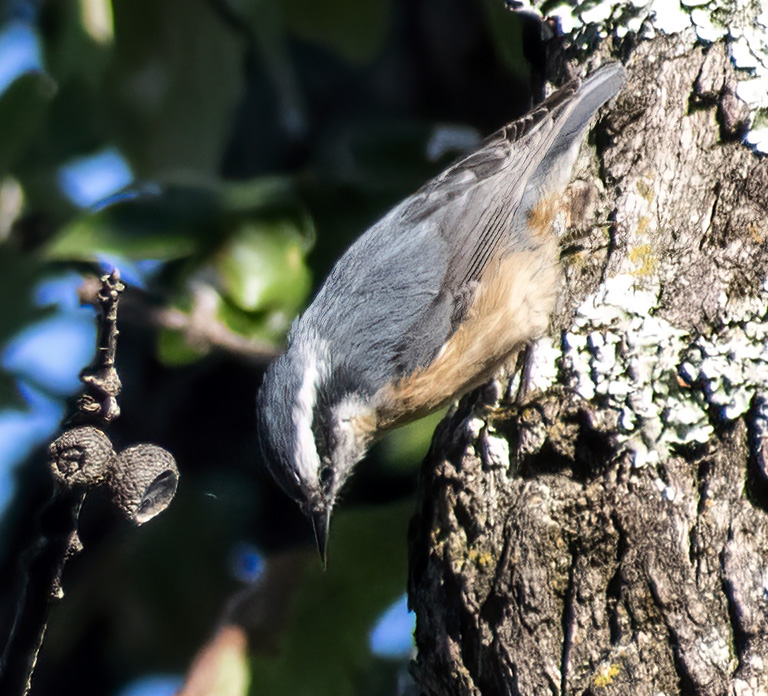 It’s October and it’s been finally star)ng to cool down a little. Migration marches on, and now winter birds are starting to show up even more. One of my favorite winter birds is already showing up with regularity, and that is the Red-breasted Nuthatch!

Here in Oklahoma we have White-breasted Nuthatches year round, but in the winter we also get to see their smaller cousins, the Red-breasted! They are tiny little birds that love to climb down trees head first. Red-breasted Nuthatches have gray backs, rusty undersides, and a black and white head. Females are paler below and grayer on the head. They can be found over much of the US and Canada in the winter, but in parts in the north and west they are year-round. They use their bills to excavate nest sites most of the time, or occasionally use old nest sites. The male will sometimes start excavating several sites but the female chooses the nest site. They also work together to cover the entrance in sap. In a rare example of animal tool use, they use pine bark to help them spread it around! The female builds a nest in the cavity, where they raise the brood of little ones.

Red-breasted Nuthatches are irruptive migrators, meaning if they have plenty of food fewer move south. This year, they are already here and more are showing up every day. I often hear them before I see them, so listen for their nasally hank-hank-hank calls. Then look up in the trees to see if you can spot one! They also love to come to feeders. They’ll fly in, grab a sunflower seed, and dash off to either wedge it into the bark to pry it open with their bill, or cache it away to eat later. I used to watch them fly right up to my windowsill where I had spread some black oil sunflowers, and it was so fun to watch them from inches away. They also like peanuts and suet.

Red-breasted Nuthatches are increasing in population, and with seeing several already this year it looks like we will have quite a few around this winter. Have fun looking for them!