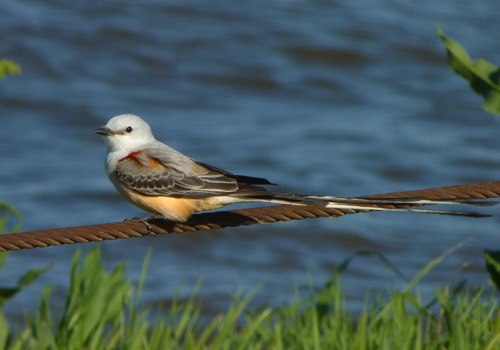 A.C. Bent, in Life Histories of North American Flycatchers, Larks, Swallows, and their Allies (reprint edition, 1963), speaking of the Scissor-tailed Flycatcher (Tyrannus forficatus), said that “[i]ts delicate and pleasing color contrasts, white, black, soft gray, salmon-pink, and bright scarlet, its trim and graceful form, and its spectacular behavior as an aerial acrobat, all combine to make the scissor-tailed flycatcher one of the most attractive of North American birds.”

In my opinion, the Scissor-tailed Flycatcher is the best of all State Birds–I’m pretty sure this was my opinion even before moving to Oklahoma as a teenager.  According to the Baumgartners (Oklahoma Bird Life, 1992), the Bobwhite was the state bird until it was changed to the Scissortail in 1951 (didn’t know that!).

The Scissortail is particularly common in central Oklahoma, but becomes less so in more forested habitats to the east and drops out completely in the wide-open spaces of the western half of the Oklahoma Panhandle.  It prefers a good mix of trees and open spaces, just what we have here in central Oklahoma.  It usually nests about 7 to 30 feet above the ground, normally lays 4-5 eggs, and can be double-brooded.  Dan Reinking (Oklahoma Breeding Bird Atlas, 2004) says they are “[r]arely parasitized” by the Brown-headed Cowbird; he also says that on Breeding Bird Survey routes from 1966-2000, there has been no discernable decline in Scissortail numbers across its entire range, but there has been a 2.4% per year decline in Oklahoma.

We usually have a contest in our local bird club to see who can find the first Scissortail in the spring.   In fall, before heading southward for the winter, the Scissortail can congregate in roosts of up to several hundred birds or more.  Many years ago there was a large roost in the middle of Norman, OK, near Warren Harden’s home.  One evening, he and I went to the roost to count the Scissortails coming in to roost in the pecan and cottonwood trees there.  We counted over a thousand birds coming in, sometimes in groups of 50 or more.  It was quite a sight.

For a number of years I managed the Oklahoma Ornithological Society’s Bird Slide Set that had photos of about 125 Oklahoma species.  For $1.00 and for any reasonable use, a duplicate of any slide in the set could be bought.  The Scissortail was the most frequently ordered slide of the entire set—hardly anyone passed it by.  So for any of you photographers who want to sell your photographs, be sure to get good ones of the Scissortail!  Another tip for photographers:  the Scissortail is unusual in that it has its most complete molt in the fall, so now is the best time to photograph—or watch—the species if you want to see the freshest, most beautiful plumage.

A good story relating to the Scissortail happened in the winter of 2007 to Jimmy Woodard and Nealand Hill.  On 3 December that year they were birding on the east end of Long Island, NY, near Montauk Point, when they saw a Scissortail.  They pointed this out to some local birders who got so excited they began calling other locals to relate the news.  At one point one of the locals was heard to say into his phone, “Of course, they know what a Scissortail looks like.  They are from Oklahoma!”  I even think Jimmy was wearing his Scissortail hat that day.