The trail was built in 2016 on 77 acres of floodplain property that is owned by the City of Midwest City. It is located between along Northeast 23rd Street between Air Depot and Midwest Boulevard next to the Soldier Creek Industrial Park (SCIP). The trail includes an ADA compliant trail head with shelter and map. Trail signs denote levels of difficulty. Picnic and bathroom facilities are available as well as a paved parking area. Ideal for mountain biking, running and hiking, the three miles of unpaved trails will engage the experienced and novice alike.  It winds across fields and through a wooded area along Soldier Creek.

The trails are maintained by the Oklahoma Mountain Bike club and not the City of Midwest City. Midwest City has plans to plant milkweed and other native plants on the 9 acre open field directly south of the parking lot. Also, plans are moving along to add several miles of trails along Crutcho Creek north of NE 23rd almost to NE 36th on city owned property.

The map below shows the location and parking facilities. You can park outside the gate if it is closed and walk the trails whenever you want. Be sure to not leave valuables in your car as this is a very visible and high traffic area. 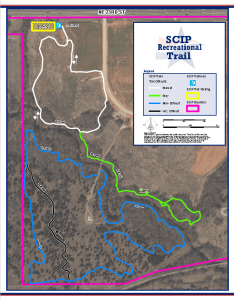 The checklist below was created in Ebird for the SCIP trails potential new OKC hotspot. It has 64 species on it from