LOCATION: Norman, Oklahoma one mile south of the junction of Highway 9 and Jenkins Ave. A mile and a half south of Lloyd Noble Area.

DESCRIPTION:  Essentially, this area follows Jenkins Street south from the Norman Sewage Treatment Plant at Bratcher-Miner Road for an approximately one mile-long strip of blacktop road and includes both sides of the road. It can be driven or walked. Foot access can be had to most of the area on the west side of the road except for one small area immediately south of the Half-Mile Woods which is marked with Keep Out signs. The east side of the road is posted. Please avoid trespassing on the posted private land. The Half-Mile Woods, the hill behind it and the Outlet Creek belongs to the city of Norman and there are no real trespassing  restrictions there. 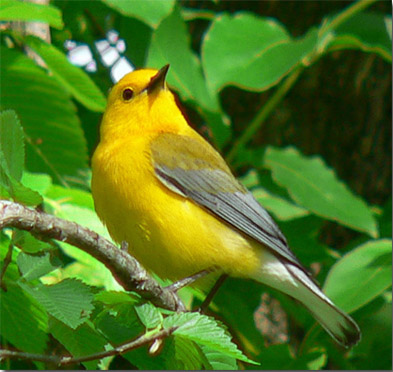 BIRDING: This area arbitrarily begins at the Jenkins’ junction of Bratcher-Miner road and runs south along Jenkins for 0.8 mile to the Green Gate on the west side of the road. It includes the compost piles on the west side of the road (a good place of winter sparrows). Next comes the Norman Police Range (not in itself a great birding spot but occasionally has interesting fly overs), the Half-Mile Woods which begins immediately south of the Range again of the west side of the road. The Woods is about .4 of mile long and 200 yards deep and is a good place for both migrating and nesting warblers and other small song birds and owls. For several years there has been a nest of Red-shouldered Hawks a few yards off Jenkins. There is also an oil field lease road (It is okay to climb over the gate) that runs through a swampy area of the Woods and if one walks to the end of that there is a fairly large beaver pond which is a good place for ducks in the winter and songbirds year round. There has been at least one pair of Red-headed Woodpeckers that nest along this road.

After any major rain event there is a small, marshy area referred to as the Brush Piles on the east side of the road just south of the Police Range. It is a wonderful place for winter sparrows and songbirds. Farther down the road on the west side, there is a small permanent creek that crosses Jenkins.

Just past the creek is a locked red gate with a prominent and totally disregarded “No Trespassing” sign. (Again no one cares if you climb over this fence.) This gate leads to a road that goes through the woods and up on to a hill called “Cancer Hill’ (named for some signage in a small enclosure on top of the hill with various hazard warnings on it.) You can follow this road along the crest of the hill back to the other side of the same beaver pond in the woods on the right or back to the Bubbler, the outlet for the Norman Sewage Treatment Plant, on the left. The Bubbler’s high quality effluent serves as the source for another permanent creek that drains ¾ of a mile to the South Canadian River. This Outlet Creek is a very good birding spot before the weeds get so tall so as to prevent passage (usually late spring). Since the creek never freezes it provides winter habitat for Marsh Wrens, Common Yellowthroats, Soras and Eastern Phoebes and many other winter birds. Also during the winter there many ducks, sparrows, and a few shore birds on the mudflats. The extent of these flats is controlled by the volume of flow of the sewage plant which varies from hour to hour. This results in a tidal-like fluctuation and the birds that visit there vary during the day based on the amount of water on the flats.

Back on Jenkins after the end of the Woods there are open hayfields on both sides of the road. The first pasture on the west is posted but the next large pasture on the west is owned by Walt and Tinker Vanderburg who generously allow both birders and fishermen to use the area and access both the river and the creek. You can access the pasture through the large metal Green Gate (Be careful to secure the gate when you go through as there are cattle in this pasture.).  Here you can walk 150 yards west to the Outlet Creek and follow it to the river about 250 yards to the south. You can also walk down the river bank for about a mile. The Vanderburgs  request that you do not climb over the fence.  The conditions on the river are day-to-day. It can go from a mere ankle deep trickle to a raging roaring torrent that can flood both banks. The best birding of course is when it is low as there are a number of sandbars and backwaters that host shore birds, waterfowl, raptors and variety of herons and egrets. There are almost always Bald Eagles on the river and in the trees along the bank in the winter and in the late spring and summer Interior Least Terns nest in the river bed and can be seen moving up and down the river.

Not surprisingly as with any good birding hotspot, there a great deal of seasonal variation in species and numbers. However, Jenkins seems to vary a great deal from hour to hour. Two trips down Jenkins an hour apart may yield some very different birds.

OTHER WILDLIFE: There is also a good number of other wildlife species along Jenkins—including White-tailed Deer, Coyotes, Bobcats, Opossums, Armadillos, Beavers, Muskrats, River Otters, Cotton-tailed Rabbits, Fox Squirrels, and many small rodents. There have been at least eight species of turtles, twelve species of snakes (but none of the Copperheads or Pygmy Rattlers often found in eastern and southern Cleveland County) and three species of lizards. There are scads of butterflies and odenates, if one has an interest in those.