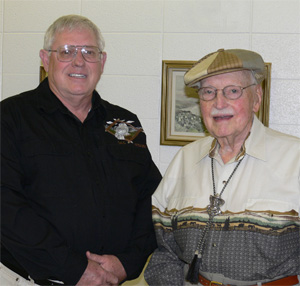 Meetings are held 7 p.m. on the third Monday of the months of September through June at the Will Rogers Garden Center, located on the SW corner of Northwest 36th Street and I-44. Please note: the January meeting is held on the 4th Monday because of the Martin Luther King, Jr. holiday. 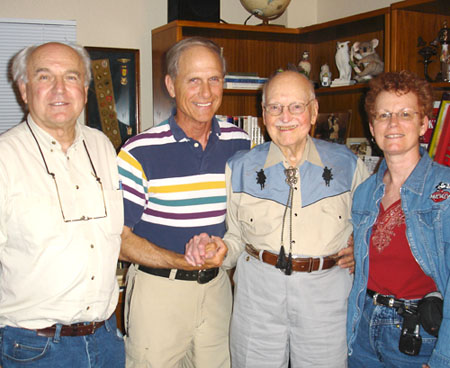 (From left:) John Shackford, Warren Harden, Dr. Sam Moore, Susan Schmidt
During the summer of 2007,  friends of Dr. Sam Moore visited with him to learn about the history of the Oklahoma City Audubon Society. As the club’s first president, Dr. Moore was in a unique position to share highlights about the founding of the organization, celebrating its 60th Anniversary in 2007. Below is the text of Dr. Moore’s history of the Oklahoma City Audubon Society.

Upon my return to the Oklahoma City area in 1946 after military service in World War II,

I resumed my interest in birding.  I met Irene Martin on a cold winter day in 1947 while birding at Rose Lake.  Ed and Irene Martin, Vic and Alma Vacin, and I formed the Oklahoma City Audubon Society in 1947 as an independent, non-profit educational and social club.  The name of the club has not changed.  Through out the history of the club, the Oklahoma City Audubon Society has neither been a chapter of, nor affiliated with National Audubon.

Our first meetings were held in member homes before the club moved to Will Rogers Garden Center.  Meetings grew from the five of us in the beginning and grew as time went on.  For many years we had pot luck picnics in July at Silver Lake.  Every November we chartered one or two buses for a Thanksgiving Safari to bird the Texas Coast and Lower Rio Grande River.  We invited speakers from the Audubon Film Series.  The movies and slide shows were presented in the Medical School auditorium as a fund raiser for the club.  Irene Martin was the driving force for many of the club activities

I certify that I was the first president of the Oklahoma City Audubon Society and that the club was founded in Oklahoma City, Oklahoma in 1947. I held the office of President in 1947 and 1948.  The club has met continuously since 1947.

The above statements are true and correct to the best of my knowledge.