Arcadia Lake is located east of I-35 in Edmond, Oklahoma. It is bounded on the north by 2nd Street and on the south by I-44/Turner Turnpike. Parks and campgrounds are access from 2nd and 15th Streets. Arcadia Lake is a water supply and recreational lake. It was built as a cooperative effort between the US Army Corps of Engineers and the City of Edmond. The normal elevation of Arcadia Lake is 1006 feet with a surface area of 1,820 acres. It is surrounded by 26 miles of shoreline. The lake, parks and camping areas are all fee-based ($6 per day / per car). (Download PDF / printable map) 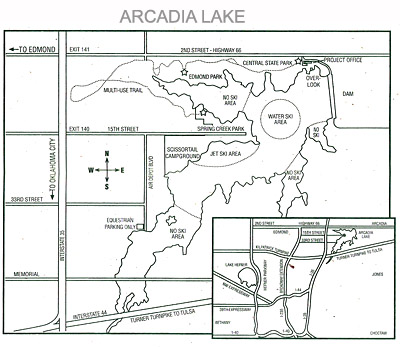 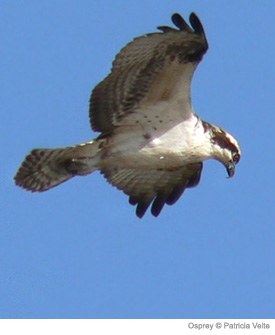 Fall and Winter: The Bald Eagle is the best bird to look for during winter months. Arcadia Lake sponsors an Eagle Watch on the first weekend in January with discounted admission. Ospreys are also seen over the lake during both spring and fall migrations. Also watch for Merlin and Sharp-shinned Hawks, Golden- and Ruby-crowned Kinglets, Cedar Waxwings, Spotted Towhee; White-throated, Harris’s, Lincoln’s and Song Sparrows. Pine Siskin, Dark-eyed Junco, White-crowned, Fox and American Tree Sparrows, Double-crested Cormorant are abundant during the winter months and roost in high numbers during the late afternoon.

Birding Observation Locations:
Spring Creek Park (15th Street): Turn left at the first paved road after the admissions gate at Spring Creek Park. This road follows the shoreline and provides a good look at ducks, cormorant, kingfisher, grebe. Watch for Orchard and Baltimore Orioles near the picnic areas along this road. The eastern edge of Spring Creek Park overlooks the beach area and provides an excellent view of Common and Red-breasted Mergansers, pelicans and gulls. Barred Owls can be spotted late in the day.

Edmond Park (2nd Street): This park is closed from October to April so it’s worth visiting the area in spring since the birds have not been disturbed for many months. The shoreline at the west end of the park is excellent for viewing Osprey, Double-crested Cormorant, Red-headed Woodpeckers, shorebirds, ducks and geese.

Central State Park (2nd Street): This is a great location for Painted Buntings during the summer months. Also listen for Indigo Buntings, Field Sparrows, warblers, and wrens. The Cottonwood Campground is a good location for many species even during peak camping season. From the main entrance into Central State Park, be sure to take the first left and tour the picnic pavilion areas. Painted Buntings are commonly found along this road.