Meeker Lake is about 2-3 miles west of the town of Meeker in Lincoln County. It is approximately 30 miles east of the intersection of I-35 and Hwy 62 in the eastern side of the Oklahoma City metro. Meeker Lake has 5 miles of shoreline and 250 surface acres.

There have been 27 checklists accounting for 134 species. Visits have been made in every month of the year except for June and September. The water level of the lake doesn’t usually fluctuate much; it stays full or close to that all year. It is surrounded by woods on three sides and has a couple of open areas which contain picnic facilities and one boat ramp. The main birding draw would be waterfowl and woodland passerines with an emphasis on winter sparrows and other birds and migrants in spring and fall.

There are equestrian trails on the west side that go to the dam and below it. There is another equestrian trail at the south end of the lake. ***Please note that the trails are unimproved and can be wet and overgrown at times. Be  prepared to get muddy and wet if venturing on them.

To reach the west side of the lake, take Hwy 62 to NS 340 and go south on this gravel road about a mile and park. A trail goes east thru the woods and fields to the dam. Also, you can walk the two track on south for about a mile. This can be a very birdy spot and offers a good view of most of the lake. To reach the east side where the parks and boat ramp are found, then go south on NS 341 a mile to the stop sign. Turn right(west) and proceed into the park. Follow the one paved road to it’s end to access the southern trail which runs for about a mile. The boat ramp and dam are to your right as you enter the park. There is no fee to enter the lake property.

I recently found a couple of trails on the west side that I had not previously known about. Turn south off Hwy 62 just east of the Mammoth Baptist Church. Drive a mile to the end of the dirt road and park near the gate. Walk south on the gravel road for half a mile. Where the two track curves right to a gate, continue straight ahead onto a wide mowed path. The trail is marked with yellow flags and a few signs labeling it as trail “C”. The trail is relatively flat with few rocks. It follows the lake for a while and runs down the west side shore for a bit. It climbs a ridge and then mostly stays in the woods. I hiked for about 1.5 miles but did not come to the end of the trail. I think it may go all the way around the south end of the lake but I haven’t ground-truthed that yet. There is a “Blue” flagged trail which veers east off the Yellow trail but I did not find the end of it either. This west side road and trail is my favorite area of Meeker Lake. This new found trail allows   you to see the large arm at the south end of the lake. That was where most of the waterfowl were hanging out. 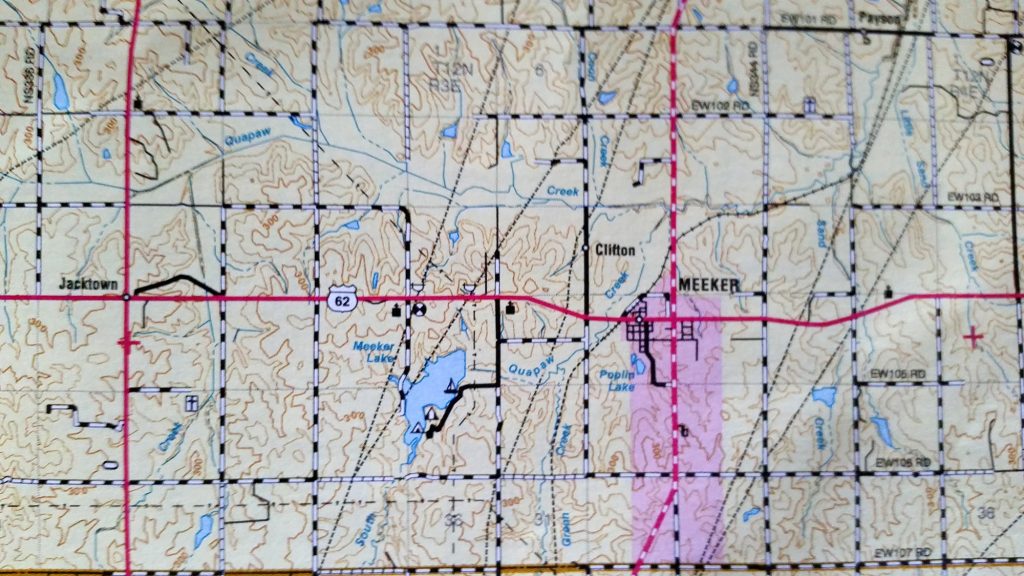