Location: Lake Stanley Draper, located in far southeast Oklahoma City, is close to I-240 between Midwest Boulevard and Westminister Road. This 2,900 acre lake with 34 miles of shoreline was built in 1963 and the water is supplied by Lake Atoka via a 100-mile pipeline.
Description of the area:   A wide range of habitats —lake, lake shore, marshes, dense “crosstimber” oak forest, woodland edges, roadcuts, roadside and other cut-over brushy areas, open grassland and thickets of Sand Plum, Poison-Ivy, Wild Blackberry and Sumac—attracts an exciting variety of resident and migrating birds. 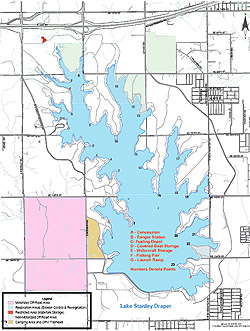 Driving directions: From I-240 take exit #8 onto Sooner Road, turn south go 2 miles to SE 104th , turn east for 2 1/2 miles to the intersection of W. Stanley Draper Drive. Continue thru this intersection to the marina. (Click here for larger/print version of map)
From I-40 take exit # 156A onto Sooner Road, turn south then continue 5 1/2 miles to SE 104th  and follow the directions provided above.

From I-35 take exit # 121B onto I-240 Eastbound then go 4 miles to Sooner Road and follow the directions provided above.

Birding Observation Locations: Birding from the safety of your car is recommended. The low curbing along the paved perimeter road provides easy pull-outs and there are access roads to fishing docks all around the lake.

Beginning at the marina, check the playground area, boat docks, scan the lake, shorelines and the adjoining grassland. From this point, you may chose to drive the paved perimeter road by going back to the intersection of West Stanley Draper Drive & SE 104th then turn (south) left. There will be several access roads to fishing docks and The Crosstimber Campground that you may wish to explore.

Another option would be to take the first left turn onto the unimproved (red-clay) road and follow this shoreline road which would give you the best birding opportunities for wintering waterfowl as well as woodland species. Both the paved and unimproved roads along the west side will intersect near the dam located at the far south end of the lake.
After crossing the dam, you may again chose to follow the paved perimeter road which becomes East Stanley Draper Drive or the unimproved road, beginning at the intersection with Westminister Road. This unimproved road does not follow the entire shoreline but it loops around a few coves and fishing docks.

Words of caution…do not attempt to drive any of these unimproved roads during or after it has recently rained!!  These roads are very isolated and help is not likely to be available. Also, extreme caution should be observed birding in these remote areas if you are alone. Unfortunately, illegal activities have been reported in some of these areas.