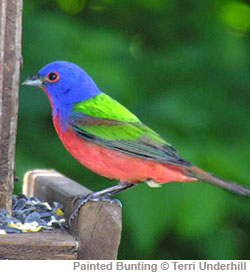 Getting to the park is easily accessible entering Covell from either Kelly or Santa Fe. You can take the main entrance into the park or follow the signs to the Mathis Skate Park on the east side of Mitch and north of Cheyenne Middle School. Both entrances are on Covell, along the south side of the park. Personally, I prefer to park and enter at the Skate Park since I can see and hear birds before I’ve even step foot on a trail.

During the summer months you most likely will have already seen numerous Mississippi Kites soaring before you even enter the park. The wooded areas of Edmond are ideal for nesting and therefore loved by the Kites, Red Shouldered Hawk and numerous raptors. This is the habitat they prefer to breed and raise their young in.

During the summer months the first song you’ll want to listen for is the melodious song of the Painted Buntings. The males sing from the tops of the trees along the paved trails close to the area he nests in. The city of Edmond has done a fine job landscaping with native vegetation the birds and wildlife seem to thrive on. Throughout the park are benches and feeding stations where you can sit and enjoy the birds. I sometimes take along bird seed just in case the feeding stations have been depleted from the squirrels and rabbits.

The majority of the trails are paved and a newly-opened trail bridge opened during the winter of 2005. This new bridge is a great area to observe the Louisiana Waterthrush during the summer months. The Indigo Buntings and Blue Grosbeaks also enjoy this area and can be seen and heard during their summer stay. 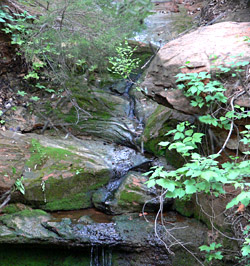 On the east side of the bridge and about 200′ south, there’s an unmarked opening in the dense trees. This is where you can walk down to a hidden waterfall and see the wonderful red rock our state is commonly known for. If you’ve ever had the urge to step back in nature but don’t want to take a drive to the country, this is great little place to check out. This beautiful area is a bird magnet in the heat of the day when the birds and critters come to bath and drink from the cool pools of water below the slow streaming fall.

On the south end of the trails is a man-made overlook. This is a great place for getting a bird’s eye view of the trees tops from down below and even a closer look at a variety of birds. Native birds can be seen carrying nesting material in spring and later caring for their young in this densely wooded area. Mockingbirds, Thrashers, Bluebirds and many other fruit loving birds and wildlife can be seen enjoying the extremely popular fruit from the native Chickasaw Plums bordering many of the nicely paved trails. An assortment of Sparrows and many other birds use the dense thicket of Chickasaw Plums for nesting and a safe haven for their young. The thorny spurs give maximum protection against even the boldest of predators. 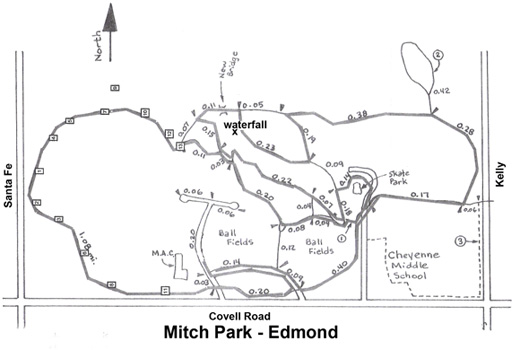