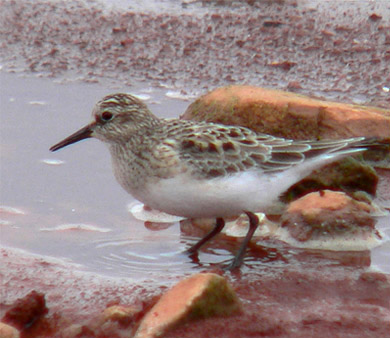 Many birds grace our state only during migration; one of these is the Baird’s Sandpiper (Calidris bairdii).  The species is named “for Spenser Fullerton Baird (1823-1887), secretary of the Smithsonian Institute and author of Catalogue of North American Mammals (1857) and Catalogue of North American Birds (1868)” (Holloway J. E. 2003. Dictionary of Birds of the United States, Timber Press, Portland, OR).  The Baird’s Sparrow is also named after S. F Baird.

The Baird’s Sandpiper is one of my favorite “peeps” (short-hand name for the five smallest North American sandpipers) for a very simple reason—it usually can be reliably identified because of two field marks:  at rest the wingtips are considerably longer than the tail, and it has a quite scaly-looking back pattern.  Contrary to identifying Baird’s, I do not feel nearly as confident calling several other peep species, especially in the fall, based on such things as a slightly longer bill, a little rusty on the back, and so on; I trust some very careful birders to identify these others correctly, but for me these sometimes seem more like educated guesses than facts.

Several authors mention that the Baird’s prefers dryer spots for feeding than most other peeps.  As they migrate in the central parts of the United States, they often associate with a mixed group of other peeps.  The Baird’s sandpipers tend to separate out to the dryer habitat near, but out of, water, while other associated peeps prefer feeding at water’s edge or while wading in water.  On the breeding ground in the far northern reaches of the North American continent, it chooses a spot in the dryer parts of the nesting area, rather than near water (it usually lays four eggs but sometimes only three).  I could find no direct reference that on the wintering ground in South America, the species chooses the dryer habitats but the fact that they can be found in the interior of the southern half of South America, they likely choose at least some habitat dryer than most other shorebirds there too:  one author mention that the bird has been found at elevations of over 10,000 feet there.

As mentioned earlier, the Baird’s Sandpiper nests in the far northern reaches of North America, and most migrate through the central U.S., between the Rocky Mountains and the Mississippi River, being particularly well condensed through the middle of Oklahoma, then proceeds southward to winter from northern Peru, through much of Argentina, to the southern tip of Chile at the southern extremity of the continent.  It is a very long distance traveler.

One thing that I find interesting about this is the fact that the northern latitudes of North America flair out substantially from the Oklahoma latitudes of the continent.  The widening out to the far north means that such shorebirds as the Baird’s (and other birds) are probably rarer per average square mile in most of the far north than as they condense in their flyways during migration through the southern U.S. (almost too obvious to mention).  So if you go out looking for Baird’s Sandpipers for a day during their migration through central Oklahoma, you will probably see more of them than you would see on a day spent looking for them on their nesting grounds in the far north.

This also indicates that environmental damage that adversely affects Baird’s Sandpipers (and many other birds) is more harmful—per unit of land—in Oklahoma than it is on the breeding ground.  To emphasize the point, the far north is generally north of drastic human intervention, unlike our habitat here in Oklahoma, which is heavily utilized by humans.  Thus, good migratory habitat is very important to the species wellbeing in our area. And thus, we in Oklahoma have more of a “responsibility” for the species welfare than those in the far north on the breeding grounds.  The states of Kansas, Oklahoma, and Texas are especially crucial along the species migratory flyway.

In Oklahoma City, the Baird’s Sandpiper finds migratory habitat at Lakes Hefner and Overholser.  Broadening out, Hackberry Flats in southwestern Oklahoma, Red Slough in southeastern Oklahoma, and Cheyenne Bottoms in southwestern Kansas provide very important migratory stopovers habitat for many species of birds, including Baird’s Sandpipers.  Hackberry Flats came into existence, as a stopover point for migratory birds, through the foresight of the Oklahoma Department of Wildlife Conservation, for which we should be thankful.