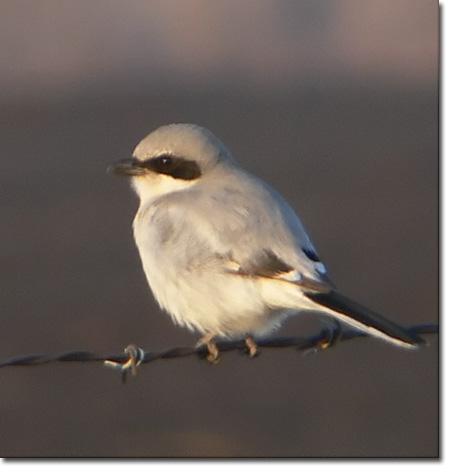 Some birds have a little extra something that leads most of us to agree that this is a species with charisma. The Loggerhead Shrike (Lanius ludovicianus) is one such bird. Two things are of particular interest to me: its flight pattern and its feeding behavior. As for its feeding behavior, this is a bird of prey (raptor), and it is also a perching bird (passerine). This shrike is the smallest passerine raptor in North America.

As for the flight pattern, it is of interest because the bird usually flies only a few feet above the ground, flapping swiftly; upon launching from its perch, it (usually) drops downward and then (usually) rises up again at the other end of its flight. To see this pattern of flight is to quickly have a good clue as to what species you are watching.

As a passerine raptor, the shrike’s diet includes lizards, mice, small snakes, small birds, grasshoppers and other insects, etc. One of its habits is to hang prey on the barbs of barbwire fences, tree thorns and the like. The reason for hanging the prey thusly is speculated to be that the bird has insufficient strength in its feet (no talons) to easily hold its prey. This is the generally accepted theory for this behavior, but whether this is the whole story remains, I believe, speculation. (Perhaps they are advertising for mates or otherwise marking territories with the skewered prey, for one sometimes sees skewered prey that appears weeks or months old—far past edible.)

Loggerhead Shrikes are found in Oklahoma throughout the year but winter and summer residents for a particular area are probably different individual birds. It is found in relatively open country. It nests early in the spring, and often chooses bois d’arc trees, which have plenty of thorns that, in addition to providing places to hang prey, may discourage at least some predators from raiding the nest. They lay 4 to 6 eggs early in the nesting season, often before leaves are out on the nesting trees they select.

The Loggerhead Shrike and the American Kestrel have similar diets and utilize similar habitats. But while kestrel populations seems to be recovering (probably from DDT “poisoning” of its eggs in past decades), shrike populations do not appear to have been so lucky in recent years.

In trying to formulate ideas for why the shrike is doing poorly compared to the kestrel, one possibility that comes to mind is that the shrikes build “open-air” nests, while the kestrel nests in cavities—old woodpecker holes, bridge pipes, and other enclosed places. This difference in nest site selection may result in heavier nest predation for shrikes than for kestrels. Dr. Jack D. Tyler, of Lawton, Oklahoma, did an outstanding study of shrikes that was published in the Wilson’s Bulletin. In talking informally with Jack, it is his considered opinion that Common Grackle predations of shrike young and eggs from the shrike’s (open-air) nests may be a major reason for declining shrike populations.

If anyone finds a shrike this summer within 15 miles of downtown Oklahoma City, I’d be interested to hear about it. We appear to be losing this species as a nesting bird in the metro area. I hope I am incorrect, but the increased density of predators that usually survive in urban areas (think grackles, cats and raccoons) may raise nest predation to intolerable levels to sustain our local shrike populations.