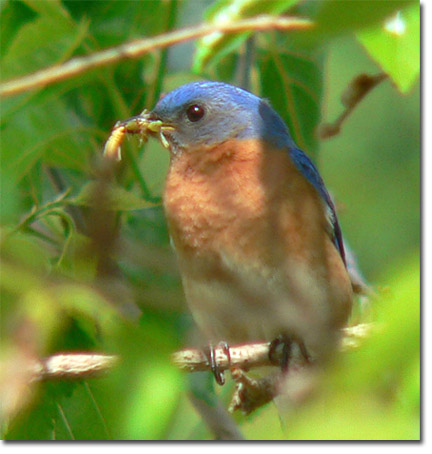 “The Eastern Bluebird (Sialia sialis) is one of North America’s best-loved birds.” This is the (very true) beginning sentence in the March, 1981, Bulletin of the Oklahoma Ornithology Society paper by Dr. William (Bill) A. Carter, “Nesting of the Eastern Bluebird in Pontotoc County, Oklahoma.” Bill’s second sentence is “[b]luebird trails, bluebird clubs, bluebird art prints, and extensive literature about bluebirds attest to its popularity…” The truth of this second sentence is quite apt as well; for me the amount of information available on the bluebird is sufficiently massive as to give one pause about where to jump in, what to emphasize, and how to trim. So my tactic here will be to pull a few things together that stick in my mind about the Eastern Bluebird—just for the fun of it—rather than trying to cover too much.

We in Oklahoma have Eastern Bluebirds year-round, but more northern locations take the appearance of the bluebird as a sign of spring—just like the American Robin in those areas. To me the bluebird is a sign of spring in Oklahoma in the following way. We see bluebirds on telephone wires all through winter, but not long after the first of the year I start noticing them doing what seem like “new” things. This winter is a good example. We have a horse lot about 2 blocks away where the birds hang out most of the winter. Then one day we see or hear them at our house; soon after the first of the year this year 3 males and 2 females came to our birdbath.

This is interesting because our birdbath is a very special birdbath: we only rarely see birds visit it. It is in the yard mostly for decoration, we have decided. I suspect the problems have to do with being too much in the sun in the summer, the water becoming too hot for sipping and bathing then, and being too dry or too frozen in the winter. But the other day it was irrefutable—birds, specifically bluebirds—were watering at the birdbath.

I think this change in bluebird behavior—showing up in new places—has to do with pairing up and beginning to search for nesting sites. This change in activity, it seems, is normally too subtle to be sure this is exactly what is going on. Nonetheless, for us in Oklahoma, this seems to be a sign of spring: when bluebirds begin dispersing to new places in late winter. Our birdbath is a pretty new place.

One author (whose name I can’t find immediately) likened the song of the Eastern Bluebird to a babbling brook. This seems to me an apt indication of what the bluebird’s song evokes. It’s not driven at us like the sound of a loud rock band, but rather like a quiet balladeer—soothing and subtle.

One of the things I enjoy about bluebirds is the fact that a percentage of their eggs—about 5% in one study—are white, rather than the usual—unmarked and blue. It’s always fun to see a clutch of bluebird eggs that are white.

Another thing has stuck with me through the years. In North Carolina, where I grew up, tobacco farmers would have a curing barn for their tobacco. These barns were usually taller than wide, and the technique was to cure the harvested tobacco by keeping the heat in the barn up with a fire inside. The idea, I believe, was to dry the tobacco sufficiently so it wouldn’t spoil (due to mold and the like). Populations of bluebirds were quite low in the 1950s in North Carolina, and speculation was that bluebirds were going down tobacco barn flues, and becoming trapped inside these barns. This was a theory that was never adequately studied, I suspect, but it sounded like a reasonable possibility.

Along these same lines—getting “lost” in barns—I once was in the loft of an old building (it was at an OOS meeting years ago in eastern Oklahoma), where Northern Flickers, apparently, had dug holes into the loft. On the floor of this loft we found the remains of several dead flickers, probably trapped inside the building, unable to find a way out.

Carter, in his 1981 paper had 4.6 eggs per completed clutch (# nests = 71) and 2.6 fledglings per completed nest (# nests = 81). The bluebirds usually try to nest at least twice a year, so at least some pairs of bluebirds likely turn out about 5 young per year, on average. But how many of these 5 survive the first winter is not known.

Recently Carter sent me some suggestions to pass along about bluebird nest boxes: Encourage nest box use in areas without cats, use predator guards, & clean boxes after each nesting should help [with nesting success] in Oklahoma.

Watch for these harbingers of spring and their late winter behavior.