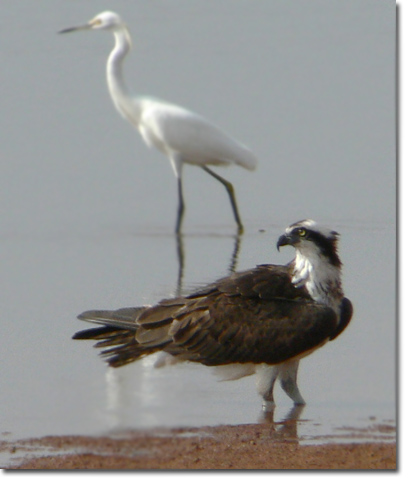 I find the sighting of most Ospreys (Pandion haliaetus) very satisfying. First you see a hawk-like bird and get set for a possible complex hawk identification.   Then you see the crooked wings, realize you ARE at a lake, and this identification becomes an easy one—it’s an Osprey. Watching now turns into uncomplicated fun. The Osprey may already be carrying a fish, one talon ahead of the other on the fish, or after a few minutes of watching, it may dive to the water after a fish—its almost invariable prey.

In Oklahoma, the Osprey is primarily a migratory species. The species nests both north—in the northern U. S. and into Canada—and south—along the gulf coast—of us. Possible breeding of Ospreys in Oklahoma are somewhat confused. Dr. Sutton was rather upset by the fact that an apparently valid old nesting record for Osprey at the Great Salt Plains National Wildlife Refuge had escaped his notice before he published his book, Birds of Oklahoma (1967). Sutton mentioned that “[E]arly reports of nesting along the Illinois River in Cherokee County…not confirmed…” He did give three summer records for the state. So this is a species to be watched for possible breeding in Oklahoma.

Here is some information on Osprey nests elsewhere. The Osprey lays 2 to 4, usually 3, eggs, reported to be beautiful, with a whitish ground color spotted with brown. Nests can be large and the same nest sites are often used for many years. Bent, in his “Life Histories of North American Birds of Prey,” said that in the past there have been some large colonies of Ospreys. One, on Plum Island, at the eastern end of Long Island, New York, was estimated at about 250 nests. This area was sold and developed starting in 1885; after this many of the birds apparently relocated nearby at Gardiners Island where estimates ranged from 150-300 nests. Numbers on both islands were just estimates, however, not actual counts.

On Gardiners Island a Mr. Abbott reported to Bent: “Osprey nests……are placed in almost every conceivable situation.” Some of these were on rocks and boulders either on land or protruding from water, on sheds, on piles of debris, on a channel buoy, on sand-bluffs, on pieces of wreckage and driftwood, to mention only some. This diversity of nesting sites on Gardiners Island may have had some relation to Ospreys being crowded out of their former home on Plum Island. And earlier, when Plum Island was crowded with Ospreys, I wonder if development along the coast of Long Island had crowded the Ospreys onto Plum Island in the first place.

Numbers of Ospreys seem to be on the rebound. The reason for increased numbers is probably due to the flushing out of DDT in our environment in recent years. DDT causes eggshells—particularly of birds of prey—to thin and break in the nest. In recent years we have had as many as 6 or 8 Ospreys at Lake Hefner at one time during fall migration. So be on the lookout! It’s particularly fun to watch them dive as they fish.