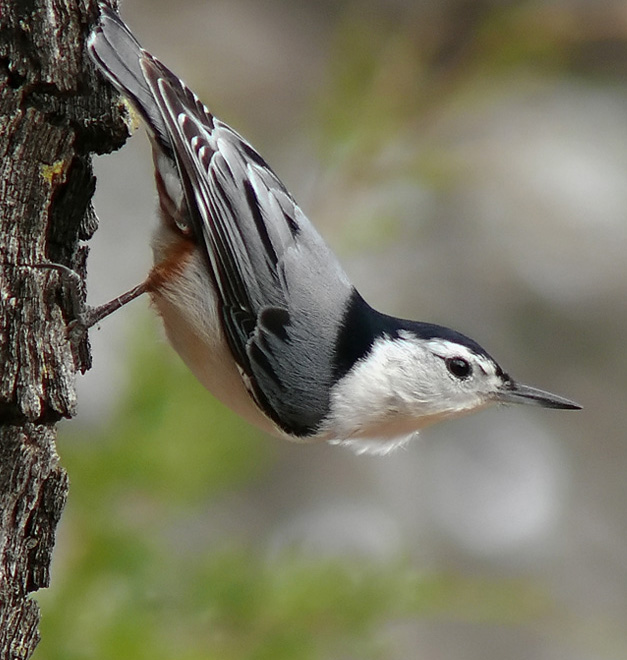 The White-breasted Nuthatch (Sitta carolinensis) and its ability to easily walk down a tree, as well as up, always strikes me as interesting and sometimes comical—it just doesn’t look “right”.  The species is often found in the company of chickadees, titmice and sometimes a Brown Creeper.

These nuthatches are permanent residents in central Oklahoma, but are also fairly rare here, usually sticking to wooded areas with fairly large timber.  They tend to roost alone in tree cavities, either natural or woodpecker made.  The species has probably increased in central Oklahoma because timber is getting more mature and larger in recent decades—especially in towns and cities where watering and lawn manicuring are going on, as well as along rivers where fire suppression is normally practiced.  At our home here in southern Logan County we have at least one pair that inhabits the blackjack and post oak trees of our neighborhood.

I once heard an interesting story from Albert Harris, an Oklahoma Ornithology Society member who lives in northeastern Oklahoma.  One day he was near a White-breasted Nuthatch on a tree when a hawk—I am guessing a Cooper’s Hawk—came into the vicinity.  The nuthatch froze in place—I believe Albert said for over an hour.  I do not know if the hawk was nearby all this time, but the nuthatch was very committed to not making the merest movement and giving away its location.

There are not many records of nests of the White-breasted Nuthatch in Oklahoma.  According to Sutton (1967, Oklahoma Birds) “In Washington County (north of Tulsa) A. J. B. Kirn considered March 10 ‘usual time of nest-building,’ found full sets of six to eight eggs March 21-30 in nests 13-65 feet up.” (Sutton was apparently quoting Nice, M. M. 1931, The Birds of Oklahoma, revised edition. Publ. Oklahoma Biol. Surv. 3 (No. 1). 224 pp., who apparently included a direct quote of Kirn, whew!).

The literature indicates that this is a very interesting species in its nesting habits. It usually selecting natural cavities in a tree or an old woodpecker hole that usually is 15-50 feet high.  The materials used for nesting begin with a bottom layer of strips of grapevines and bark chips.  Then an inner layer that is often made of wild rabbit fur, sometimes the fur of other animal, and may contain feathers.  Such a nest really sounds cushy!  The species is single-brooded but makes up for not being double-brooded by laying from 5-10 eggs, frequently 8, about twice the number of eggs each nest of a double-brooded species lays.  As a hole nester, it is rarely parasitized by the Brown-headed Cowbird.

I can remember seeing only one possible nest in the central Oklahoma area.  It was many years ago in Lincoln Park in northeastern Oklahoma City:  I think I saw a nuthatch go into a hole in an oak tree that was maybe 15-18 feet high that I believed was an active nest (Why else would I remember this one sighting from maybe 50 years ago).  Another time I saw a nuthatch enter a tree cavity, but it was clearly “just looking”; this also was in northeastern Oklahoma City.  In this case I got a photograph of the bird hanging upside down at the hole, which made for a “funny” picture; also this is a “fresh” memory—perhaps only 25-30 years old!

This spring I am going to try to pin down where the pair of nuthatches in our neighborhood nests, but I know I will be very lucky to find the nest—too many backyards I cannot easily enter.  Maybe some of you have better areas where you can watch for a nest; I do not think there is even one nesting record in the literature for the Oklahoma City area:  start watching for courtship behavior late in February, nest-building in the first three weeks of March and egg incubation in the last 2 weeks of March.  (You realize I am basing this on no records for our immediate area, so figure in your preferred amount of slop on these suggestions.)  The earliest Oklahoma date for young out of the nest is April 29th.  This gap between nest-building in March and young out not until late April brings up, I believe, an interesting point—there is really quite a dearth of information on this nuthatch—at least in Oklahoma.  I suspect the early records reported by Kirn may have related to egg collecting going on way back when.