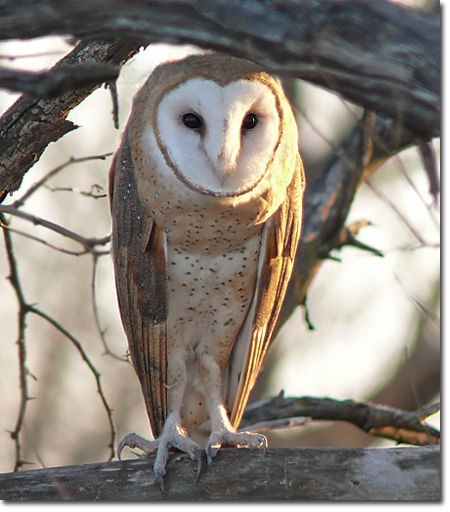 The Barn Owl (Tyto alba) is both secretive and beautiful: we do not get to study their plumage closely or often, but when we do, it is a beautiful sight. Their plumage has very soft colors, lots of white on the breast, then some beautiful dapples of light tan and gold on the back. Bent, in his Life Histories of North American Birds of Prey, Part 2 (1961, p.140) calls one of its nicknames—Golden Owl—“a pretty and appropriate name”. Because of its heart shaped face that somewhat resembles a monkey, a more common nickname is Monkey Owl.

The Barn Owl usually hunts after dark, using its acute hearing to locate prey. They are widely acclaimed to be great “mousers.” No doubt this owl is much more common than most Oklahomans believe, because the owls are nocturnal and people are diurnal, and the owls see well in low light, while we do not.

According to the web site “The Barn Owl Trust,” the Barn Owl is the “most widely distributed land bird in the world.” Dr. George M. Sutton, in his book, Oklahoma Birds, (1967, p. 250), has a very interesting paragraph on this: “There are several reasons for the widespread distribution. First, the species has been in existence for a long time: fossil remains of Tyto alba [the Barn Owl] have been reported from Pleistocene deposits in Florida and California. Second, it is not highly specialized in food habits: it eats small mammals, small birds, insects, frogs, crayfish, etc. Third, since it has a disproportionately great wingspread, high winds may well have transported it from island to island, even from continent to continent.”

We usually manage to find one or more Barn Owls on our Christmas Bird Counts. On two occasions we have had them nesting during the Christmas Count period, once on top of Mercy Hospital a number of years ago and once in the Bell Tower at Memorial Park Cemetery a couple of years ago. Sutton, in his book cited above, gives the early date for nesting in Oklahoma as March 4, and the latest date on October 1. In his book, Birds of the Great Plains, (1979, p. 195), Paul A. Johnsgard states that “In Texas, breeding occurs almost throughout the year, but most nesting is during winter, with eggs reported from November 13 to May 16. Perhaps our winter nestings are an indication of global weather changes coming our way. For the birds that nested in Memorial Cemetery, however, I wonder if it was not because a lot of Starlings that roosted in the cemetery on winter nights have provided abundant prey for the owls. Examining regurgitated owl pellets of nesting birds in wintertime might help answer this question.

According to the Bent book cited above, the Barn Owl usually lays 5-7 eggs, but sets of 9-11 are not uncommon. Incubation begins soon after the first egg is layed, so when the young hatch they form a “stairstep” of sizes and ages. This is Mother Nature’s way of dealing with any food shortages for the young, should one occur: it gives the oldest and biggest young the best chance of surviving in good health.