When someone mentions hawk, the Red-tailed Hawk (Buteo jamaicensis) is usually the first one to come to my mind.  I suspect it is also the one that typifies for many other people the idea of a hawk.  There are several reasons for this I believe.  First it is the most populous hawk in the United States; in North America it is the second most widely distributed hawk, behind the American Kestrel; and it is the easiest hawk to be found and observed.

Most adult Red-tails have a reddish-brown color on the tail which—if present—makes them relatively easy to identify as to species.  First year birds are harder to identify—they have barred tails that do not have reddish-brown in them.  One interestin 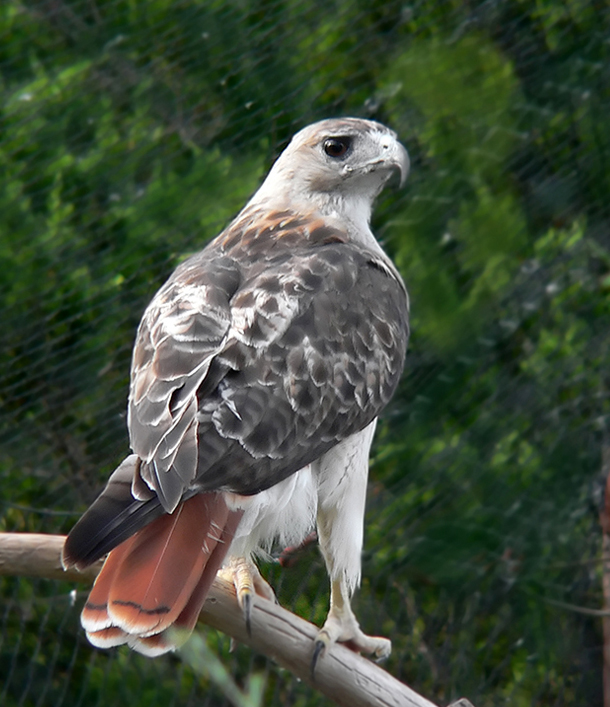 g point of identification on the Red-tail is that the back has random splotches of white on it; this field mark can get you started in the right direction when the tail cannot be clearly seen or when you are dealing with a young bird.

On Breeding Bird Surveys (BBSs), Red-tails through the central plains, including Oklahoma, vie for the area where they are recorded most frequently.  (This does not mean that this is where they are most populous, only that more birds per BBS route are seen here.)  Breeding populations cover the entire U.S., and winter populations cover most of the U.S.  Undoubtedly it has been the most successful species of hawk in the U.S.

There are 14 subspecies recognized across the range of the Red-tail, some of these outside the U.S.  These subpopulations vary from very light- (Krider’s) to very dark- (Harlan’s) plumed birds.  To complicate the situation further, within a particular subspecies there are light and dark forms (as well as “intermediate” birds in some cases); and on top of all of this is the fact that each form has a differently colored pattern in juvenile plumage, not to mention the added complication of interbreeding among these different forms.  Thus, precise identification of a form is complicated and sometimes virtually—if not actually—impossible, outside of DNA analysis.  Our most common hawk is also our most variable in plumage.

Varying more from the normal Red-tail than any other subspecies is the Harlan’s Hawk:  adults and young are mostly black.  For many years, classification of the Harlan’s has bedeviled the American Ornithologists’ Union (AOU) (who set the terms for species/subspecies classifications).  From 1833-1891 Harlan’s Hawk was considered a full species; from 1891-1944 a subspecies; from 1944-1973 a species; and from 1973-present a subspecies.

One of my favorite stories about Dr. George M. Sutton involves a dark Red-tail.  Some members of the Tulsa and Bartlesville bird clubs had taken some pictures of a dark Red-tail and quite a debate arose among club members as to exactly what form it was—I suspect the debate was between Harlan’s and other dark forms of the Red-tail.  To settle the question, several people gathered at the OU Bird Range in Norman to hear Dr. Sutton’s diagnosis of the bird’s true identity. After carefully looking at all the pictures, Doc said, “Well, it’s a dark hawk all right.”  Sometimes you need to take a step back and realize you just cannot ID everything.

Items that serve as food for Red-tails varies greatly:  from insects to mammals at least as large as raccoons; only about 15% of their diet is birds or poultry.  Now, in the middle of April, many nests should be active in Oklahoma.  The number of eggs laid by a Red-tail can vary from one to five, but usually only two or three.   Eggs are incubated for about 28 days; and from hatching to fledging takes about four weeks.  Bent (A. C. 1961. Life histories of North American birds of prey, part 1, Dover Publ., Inc. New York) discusses an interesting habit of nesting Red-tails: he states that a green bough is brought to the nest almost daily, particularly while the hatchlings are young; Bent believes that, at least in part, the green bough is brought to the nest to act “as a sun shade, as the young have been seen to repeatedly pull the bough over themselves and crouch beneath it.” Bent also says that these boughs may serve as food, because the young have been observed to eat them; they may also serve to hide the young from enemies.