The Northern Bobwhite (Colinus virginianus) is a permanent resident of the southern states and well beyond.  In Oklahoma it is found over the entire state, perhaps with the exception of the Black Mesa area of northwest Cimarron County. 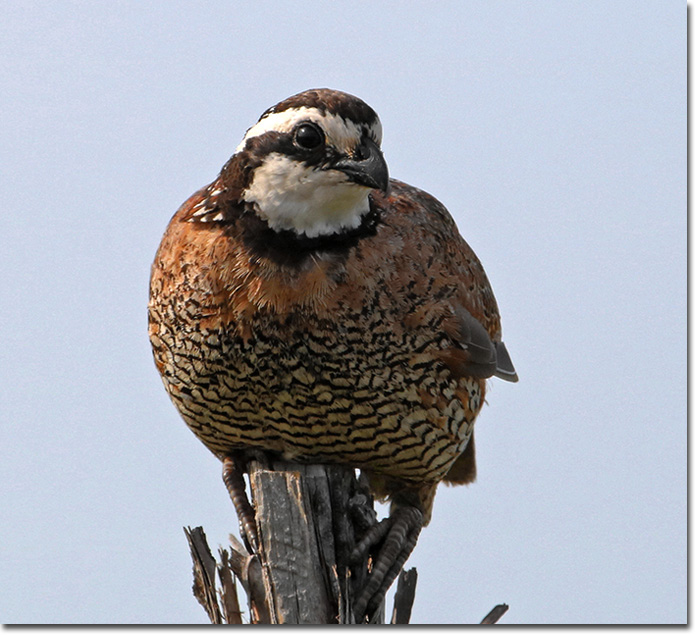 This butterball of a bird is known by most birders.  The male has a white eye stripe and throat, while these feathers on the female are a light buff.  Almost everyone—not just birders—knows the male calls:  “bob-white” and “bob-bob-white.”  Beginning birders often confuse the bobwhite with the meadowlark; the meadowlark, however has white in its tail, while the bobwhite does not.  Among hunters, the bobwhite is likely the most popular game bird in North America; on rare occasions in the distant past I have eaten cooked bobwhites, fixed in gravy.  Properly prepared, they are, I have to admit, delicious.

To my best recollection, I have seen only 1 nest of the bobwhite; I found it when I was about 14 years old and living in North Carolina.  I do not recall the exact number of eggs in the nest, but it definitely had wall-to-wall eggs, probably the most eggs I have ever seen in any one bird nest; my present day guess for that nest would be about 15 eggs.  I found the nest by first seeing a female fly into an area of good native grassland that was in a small valley between 2 slightly rolling hills.  I walked around for a while in the area where the female had flown and eventually found the nest.  I cannot even remember if I flushed the female from the nest or not—it is just the large number of eggs I remember.  According to Bent (1963, Life histories of North American gallinaceous birds) “[t]he bobwhite ordinarily lays from 12 to 20 eggs, 14 to16 being perhaps the commonest numbers…”  Another source says that eggs above 18 and up to 30 in any 1 nest are laid by more than one hen.

The nest is constructed on the ground, starting with making a shallow bowl, then covering this bowl with dead grass material.  The top of the nest is built so that it is arched over leaving only 1 exit, to 1 side of the nest.  Another quote from Bent is that “[i]n the few cases where nest construction was under observation the work was done entirely by the male under the supervision of his mate.”  This may be because the male will at least sometimes continue calling while he is building, whereas the female would probably be silent, and therefore might be overlooked if she contributes to the building.

One of my best recollections for the bobwhite was a recent one, on May 16, on a field trip to Mitch Park in Edmond that Hal Yokum helped lead.  To my surprise, our group heard at least 2 males bobwhites calling; I had given up much hope that I would ever hear that “bob-white” again close into town, but apparently, Mitch Park, at 280 acres, is large enough to sustain a small population of them.  I was impressed with the grassland found in the park.  The large trees often fade into shrubs, and the shrubs faded into grassland.  Thus the vegetation tended to be continuous from treetop to bare ground.  Several people with better ears than mine also heard several Bell’s Vireos, a sign of thick shrubs near the ground, where the vireos will nest.    And the adjacent grasslands to this shrubby area may provide places for the bobwhites to nest.

Our speaker at the June OCAS meeting will be talking about Northern Bobwhites.   As you may be aware, there are a large number of bobwhite studies being done in Oklahoma at the present time, by the Oklahoma Department of Wildlife Conservation and by the Oklahoma Cooperative Fish and Wildlife Research Unit in Stillwater.   It should be interesting to find out what is being learned about the bobwhite:  why are populations declining in the state and what might be done to help reverse this population trend.  It should be a most interesting program!