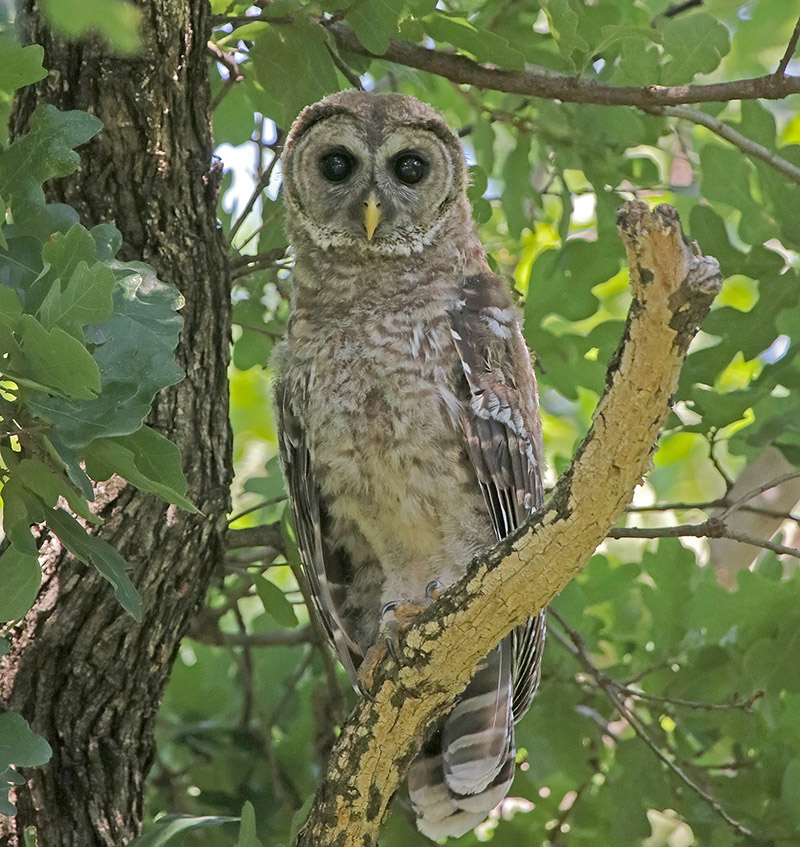 Once, on an Oklahoma City Christmas Bird Count I was trying for Barred Owl as the first bird of the day—this was before the species became more or less regular on our count.  I was sitting under a bridge in northeastern Oklahoma City.  It was very early in the morning and I was cold and drowsy—half asleep really.  It was just getting a little light and I had squeaked several times to no apparent effect and had surrendered much hope of seeing or hearing a Barred Owl that day.  Suddenly I was startled by one loud “ALLLLLLLLL” almost directly over my head and very nearby.  It was the last note of the Barred Owl’s call, something I have never heard given as a solo part before or since.  By the time I peeked out from under the bridge the owl had already flown away.  In thinking things through as I sat there, the only thing I could figure was that my squeaking had brought the owl in to perch on a telephone pole that was just out of my line of vision and only about 20 feet from my ears!  Count day was off to a good—If startling—start!  I was now awake!

The history of the Barred Owl in the Oklahoma City area is interesting.  I tried to search records on our Christmas Bird Count (CBC), but was not totally successful.  I did find one early record, about 1955, on our count, but difficult computereeze (for me) beat me out of the records for all our CBCs.  From recollection, I remember that we have been reporting the species with increasing regularity for maybe 12-15 years.  With a nasty weather CBC day we still can get skunked on this species once in a while.

About the late 1970s we had a member named Georgie Edwards; he was about 12 years old and told us that he had seen Barred Owls in his family’s woodlands along Deep Fork Creek in northeastern Oklahoma City.  We in the club received his report with perhaps more skepticism than deserved, because WE could never find the owls there.

Georgie is now George Edwards, full grown and running his own environmental company.  He invited us to survey his family property on the last two CBCs:  Betz Hacker and Bob Holbrook birded with George two CBCs ago; it was good to reconnect with him after so many years!  And we no doubt owe him an apology for not being more trusting in his Barred Owl sightings of long ago!  So here’s to you George!

Behind our house is a wooded ravine.  When we first bought the property, I figured I would be doing considerable birding along the ravine, but I evolved into allowing birds there to do whatever they wish, generally away from my prying eyes.  We have heard Barred Owls call from the ravine—and around our home—for several years.  Last year the owls almost surely nested either on our property or very nearby;  we heard at least three owls calling for much of the spring/summer, sometimes apparently from our deck and roof.  We had been having a few mice that had made their way into the house and we were having trouble catching them.  It may have been mere coincidence, but one day our mouse problem was solved.  We had no more mice and it was not we who had caught them!  Another good possibility was the Barred Owls.  We just heard one of the owls nearby the other day—early March.  We welcome them again for a number of reasons, including mouse control.