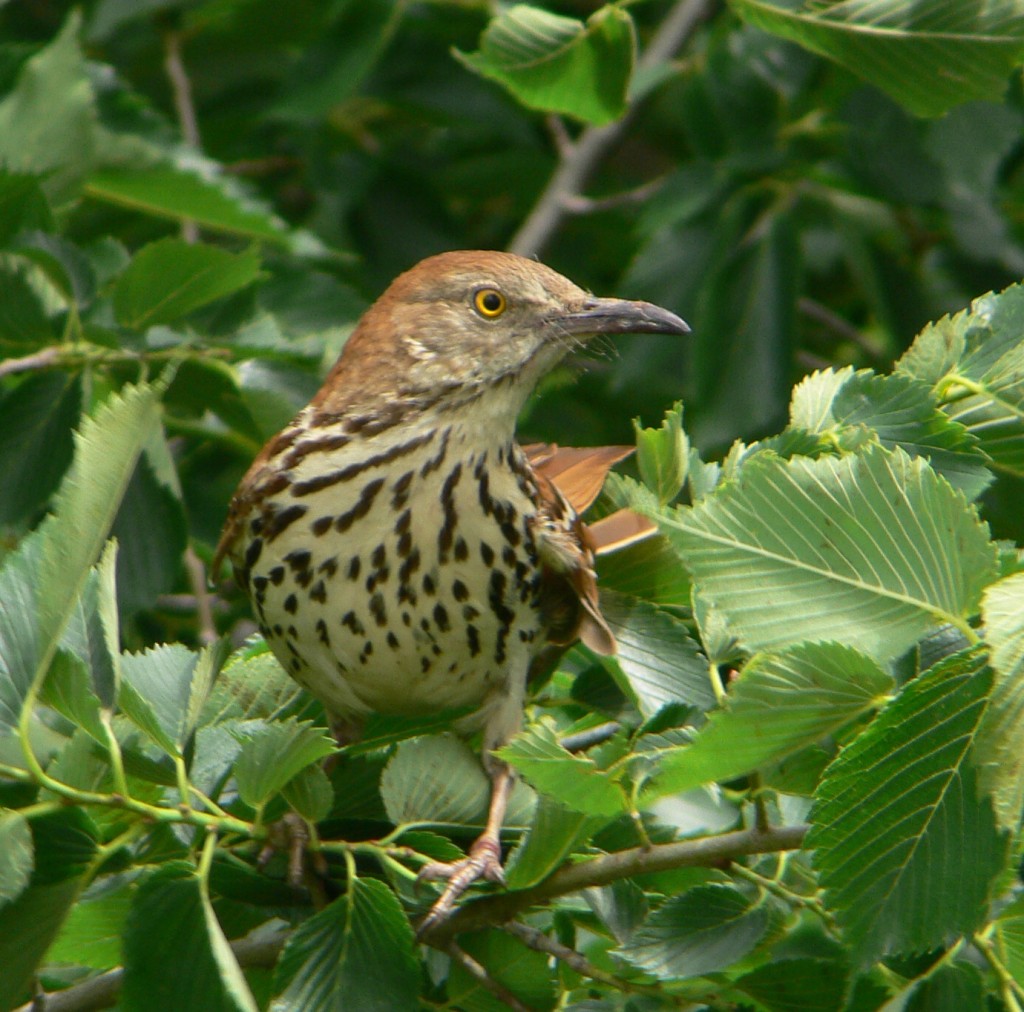 The Brown Thrasher (Texostoma rufum) is about 11.5 inches long, is reddish brown on the upper (dorsal) surface, and white on the lower (ventral) surface with strong brown streaking on the breast.  Two wing bars, a long bill and a yellow eye further help to identify it. No other thrasher is normally found in central Oklahoma. Other birds we have in central Oklahoma that we might confuse with the thrasher, such as the Wood Thrush and other thrushes, are less than 8 inches in length.

The Brown Thrasher has an interesting relation to Oklahoma. In winter we have a few scattered very thinly over much of the state, especially thin in the western parts of the state. In the breeding season, however, it is a common nester over virtually the entire state, although it is still somewhat less common in the western part of the state than the eastern. Here in central Oklahoma it is a rare winter bird and a common breeder.

The Brown Thrasher is an early spring arrival, helping us out of the winter birding doldrums; according to Sutton (1967. Oklahoma Birds) birds to the south of us begin moving back into the state in the last half of March, about now. Males seem to move in first, 10-14 days before the females. After the females appear the males start singing.  The voice of the Brown Thrasher is somewhat reminiscent of the Northern Mockingbird. But unlike the mockingbird—that often repeats a single phrase a number of times, the Brown Thrasher usually repeats a phrase only once; thus its phrases are usually doubled, sometimes tripled. And whereas the mockingbird mimics many other bird calls, the Brown Thrasher does so much less frequently and “generally avoids vulgar plagiarism, but doubtless profits by the musical suggestions of other birds.”  [I ran into this somewhat humorous sentence in Bent who was quoting Dr. Charles W. Townsend (Bent, A.C. 1964, Life histories of North American nuthatches, wrens, thrashers, and their allies).]  Other ornithologists give moderate lists of the bird species they have heard the thrasher imitate.

Nesting begins in mid-April (Sutton). The nest is usually built in low brushy areas, from 2 to 15 feet above ground.  On rare occasions it is found nesting on the ground. Sutton, quoting M. M. Nice (1931: 140), gives one instance of a single nest found on the ground, out of a total of 87 nests found. I once also saw a nest on the ground. Dr. Jack D. Tyler of Lawton, Oklahoma, and I were in Cimarron County and he accidentally flushed a Brown Thrasher that had built its nest on the ground.  he nest was under a fallen tree branch that had a few bare twigs above the nest to give the nest a little protection from grazing cattle, I suspected. It was a quite unusual nesting occurrence we thought.  It therefore surprised me to read that A. C. Bent found that in southeastern Massachusetts half of the thrasher nests he had found were on the ground. At least 1 other ornithologist, nearby in the Boston area, had about 40% of nests on the ground.

As for the nest itself, the outer layer is built with large twigs; as layers are added the twigs tend to become smaller and smaller. The last layer is usually clean rootlets, most often those of grasses. The number of eggs laid is usually 4 or 5, most commonly 4. The base color of the egg is bluish, bluish-white or white. It has fairly heavy dots and spots of reddish-brown or a duller brown on the ground color; sometimes the eggs have little or no spotting, showing primarily just the ground color. Incubation of the eggs lasts for 11-14 days and nestlings remain in the nest about 9-13 days.

Another point I find interesting about nesting thrashers is that cowbirds, on rare occasions, parasitize their nests.   Bent, quoting Dr. Friedmann (1929), who probably remains the world authority on the cowbird many years after his death, stated that the Brown Thrasher “is the largest passerine bird affected by the parasite [cowbird], and is the largest bird definitely known to have hatched and reared a young Cowbird.”