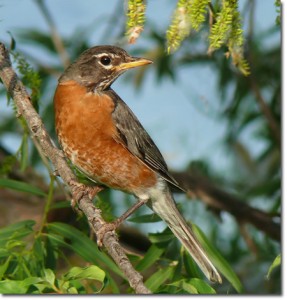 The American Robin (Turdus migratorius) has long been awaited as a harbinger of spring across the northern U.S. and in much of the tree-covered parts of Canada.  But across most of its extensive range in the U.S., including Oklahoma, this member of the thrush family is both a wintering and breeding species.

Most members of the thrush family are rather wary of man.  I suspect the robin started off being a wary thrush too.  Bent (Life histories of North American thrushes, kinglets, and their allies) quotes H. C. Kyllingstad as saying that the robin around Mountain Village, Alaska, (before statehood) “…is not the confiding creature that it is in the States.  Most frequently it nests away from the village as the native children like robin eggs to eat…”

In much of the U.S. and over many generations of robins, the robin probably adapted to living in man-altered environments.  For the last 200 years, as the number of lawns in the U.S. has increased, I suspect robin numbers have too.  These lawns have provided a common food item for robins—earthworms.  In addition to the increase in the number of lawns, the Migratory Birds Act now protects the robins in our yards from some of the negative consequences of human activity.

To support this supposition further, I compare the robins’ behavior with that of a close relative, the Varied Thrush, a bird of the northwestern part of the North American continent.  Many years ago a Varied Thrush showed up at Oxley Nature Center in Tulsa.  I went there with a big lens camera to try to substantiate its presence with photographs.  Seldom have I encountered such a retiring, difficult bird to photograph (the male Painted Bunting being another good example of a shy bird). The thrush would jump onto open ground for a few seconds, then rather quickly retire into nearby woods to become invisible again.  I finally got a few pictures that could verify the bird’s presence, but they were very hard-earned.  I could have taken many photos of robin of equal or higher quality in the same amount of time I spent getting these marginal Varied Thrush pictures.  I suspect the robin was once a similarly shy species, before lawns became commonplace on the North American continent

Breeding Bird Survey (BBS) data from 1966-2003 show that for some 80% of the central part of the U.S.—west of the Appalachian Mountains and east of the Rocky Mountains—the robin has increased, on average, more than 1.5% a year or more than about 55% over the entire period. This area of the robin’s range is the largest area of population increase in its North American range over this time period.  These years of robin increase—since the BBS began in 1966—likely relate most directly to another fortuitous habitat change for the robin—the population explosion of Eastern redcedar trees, a tree that has become quite a “pest” in Oklahoma and elsewhere. The mechanism may be quite simple. Robins eat redcedar berries, then regurgitate the seeds or void them in their droppings; more cedars grow from these seeds, feeding more robins and so on, until numbers of both species are quite high.

It is hard to believe now but back in the 1960s, we sometimes had trouble finding any robins at all on our Christmas Bird Counts.

On the evening of 19 January 2013 Warren Harden had a remarkable observation of robins.  As he was about to go into his home in Norman, he saw a bunch of birds flying overhead, some at treetop level, others just dots in the sky above. With a binocular he observed that all the birds he was seeing that were flying from NNW to the SSE were robins. The flock stretched as far as he could see to the east and west of him. He began estimating the number of birds in a wedge of sky above him and noted that about 50-100 birds were passing overhead every 8 seconds.  He watched this huge flock of robins as it continued for 40 minutes.  When he multiplied out the estimated number of birds, the number was so large as to be unbelievable.  So he divided the number by 2, then 2 more, and still came up with over 100,000 birds; he will not tell me exactly how much over that number he came up with because the number, apparently, still sounds ridiculous to him. The birds did not reappear the following evening or thereafter.

Warren could not come up with any satisfactory explanation for the huge flock. If the birds had been migrating, they were flying the wrong way, NNW to SSE.  If they were going to a roost nearby, why did the birds not “condense” into a smaller stream of birds rather than remaining in a “river of birds” as far as Warren could see from east to west.  All About Birds (http://allaboutbirds.org/guide/American_Robin/id) says that “In fall and winter they form large flocks and gather in trees to roost or eat berries.”  Warren’s sighting, a remarkable report, certainly falls into the category of large.  Huge is more like it.