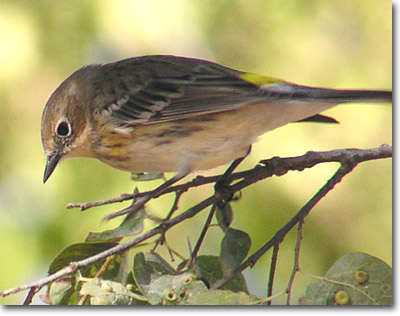 The Yellow-rumped Warbler (Dendroica coronata), according to the 1986 “OOS Date Guide,” can be found in central Oklahoma from October 6-May 12, so the last ones should be departing about now. But there have been strays seen later. If you see one in the Oklahoma City area the last half of the month it is worth noting. Perhaps all the rain we have been having will stall migration for a few birds until later in May, so keep your eyes open. I would like to discuss a bit about the yellow-rumps stay in central Oklahoma, but also I want to cover a few details about when they are on the breeding grounds elsewhere.

First, there are two races of the Yellow-rumped Warbler, the Myrtle race and the Audubon’s race. The primary distinction between the two races in the field is that the Myrtle race has a white throat, while the Audubon’s race has a yellow throat. But good luck telling this difference on dull-plumaged birds, especially since there are intergrades between the two races that further complicate identification. It should not be an embarrassment to anyone to say of a particular bird, I just don’t know which race. In winter here in central Oklahoma we have almost all Myrtle race birds, with only a very small number being definite Audubon’s race (1% might be too high). The more westward one goes in Oklahoma in winter the more likely one is to encounter an Audubon’s race bird.

The Yellow-rumped Warbler is the heartiest of the warblers of North America, some even spending the winter well north of Oklahoma. Here we see quite a few in wintertime (2007 OKC CBC—129 birds; 2008 OKC CBC—207 birds). Its diet in winter has been stated to include many types of berries, including cedar berries. Given the increasing prevalence of cedar trees on our landscape, I suspect that cedar berries are their primary food in winter in Oklahoma.

One day sometime after the first of the year we are likely to see a really brightly-colored warbler that we momentarily can’t identify, then realize it is a Yellow-rumped Warbler “brightening up” (with bright yellow, black, and blue-black) for spring. Northward migration usually involves males first, then females a week or so later, so any bird we see now is likely to be a female.

The breeding ground of Yellow-rumped Warblers covers most of the timbered regions of Canada; it carries southward into the U.S., especially along eastern and western mountain ranges, the Myrtle race coming southward in the eastern U.S., and the Audubon’s coming southward in the Rockies. The closest Yellow-rumps to nests from central Oklahoma (according to range maps) are of the Audubon’s race in northcentral New Mexico. Populations there nest at high elevations that may approach timberline. The Yellow-rumps usually nest in evergreens from about 15-50 feet above ground and usually lay 4-5 eggs. They can have two broods, and this may account, to some extent, for their overall large population numbers.

So keep a watch out for any late-migrating Yellow-rumped Warblers. In any case, they’ll be back next fall—to brighten up our winter skies.