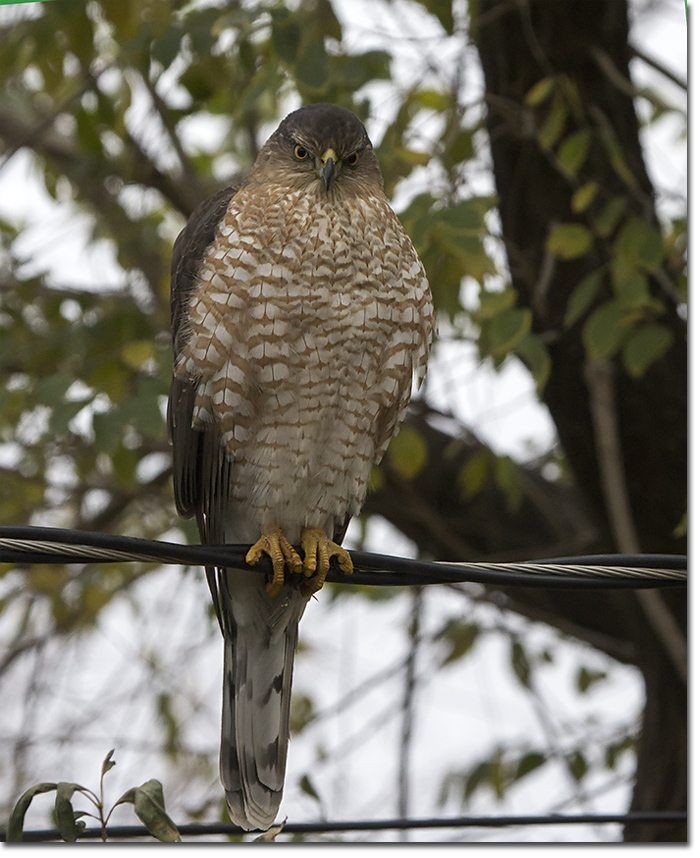 I always have a moment of pleasant surprise when I see a Cooper’s Hawk (Accipiter cooperii) fly over.  Their flap-flap-flap—sail behavioral pattern is always a bit of a thrill, partly because most of the time I know I have just a few moments to observe the bird before it disappears.  And if it is a fairly small Accipiter I know it may be a Sharp-shinned Hawk instead:  In wintertime—CBC time—we have both Cooper’s and Sharp-shinned Hawks.

It is particularly appropriate to discuss the Cooper’s Hawk before our Christmas Bird Count. There are male and female size differences for both the Cooper’s and Sharp-shinned Hawk. The two sizes that are not too difficult to identify are the relatively large female Cooper’s Hawk (about 19 inches) and the quite small male Sharp-shinned Hawk (about 9 inches). But it is really tricky to separate the medium-sized male Cooper’s (about 14 inches) and the female Sharp-shinned Hawk (about 13 inches):  these two birds are about the same size, about the same color pattern, and both have the same flap-flap-flap-sail flight pattern. I hear that a number of falconers learn how to readily tell the differences between these 2 intermediate-sized birds, even in flight. I suspect that a number of the ones that hang around in backyards and watch for feeder birds may likely be Sharp-shinneds, but most of the ones I see while driving around seem to be Cooper’s, usually the big females, which are fairly easy to identify.

Over the years I have become a little edgy about calling any of the “‘tweeners” either a Cooper’s Hawk or Sharp-shinned Hawk. Some of it springs from a possible missed ID I made years ago. An excellent birder and I were in the field and saw a “’tweener” and both of us thought it was a Sharp-shinned; we returned to the same area a couple of months later and found a pair of Cooper’s Hawks and an active nest. I have kidded my friend about our possible misidentification (and only a possible missed ID) by pointing out to my friend that I am just a “peon” birdwatcher, with no reputation to protect, but his background is such that he has considerably more standing than I—so what does he do if a mistake is made? Fortunately, my friend is a good sport about teasing—we are still friends.

Of course, we all make mistakes in bird identification.  This subject brings to mind something John Newell once said: “If somebody tells you they have never made an ID mistake, you better check that person’s bird records very carefully; we all make mistakes.” The task, really, is to keep misidentifications to a minimum. (After this discussion don’t all you Oklahoma City CBC counters turn in Cooper’s Hawk when you really think you saw a Sharp-shinned Hawk!)

If it is in summertime, there is no identification problem of Cooper’s, because the Sharp-shinned are not around—they nest far north of us—while the Cooper’s nest here in central Oklahoma. They usually lay 4-5 eggs in a nest well up in a tree. In doing research on them in Cimarron County a number of years ago, I seemed to find the nests in areas where there were thicker forests of cottonwood trees that were about 2/3rds full-grown, rather than in areas with tall, well-spaced cottonwoods.

I believe the Cooper’s Hawk, which feeds mostly on small birds has made a rather dramatic population recovery in central Oklahoma over the last decade or two  Dr. George Sutton, in his 1967 book Oklahoma Birds, makes no mention of a declining population. But very roughly, from about the 1970s to about 2000, it is my opinion that the species became quite rare to nonexistent as a nesting species in central Oklahoma. This initial population decrease was probably due to the use of the pesticide DDT: DDT causes the eggshell of birds to thin, so that eggs will break just due to the weight on the eggs of an incubating adult. DDT became concentrated as it moved up the “food chain” and the Cooper’s Hawk, being a top predator, was one of the worst sufferers of this eggshell problem from DDT. The use of DDT was banned in the U.S. in 1972, and I believe this resulted in Cooper’s Hawks making a fairly dramatic comeback that has been most notable in the last 15 years or so.