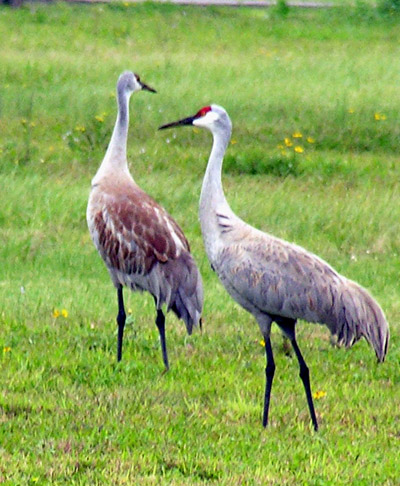 There is a wild sound we sometimes hear in the spring in central Oklahoma that says so much about wildness. It is the high eerie call of the Sandhill Crane. Almost always the calls of a flock of cranes reach my ears well before I see the birds. It is always a pleasure to look for the flock to see where the calls are coming from. For me the calls are a reminder that there are still wild things that remain in our battered landscape.

Once, many years ago, in late winter or early spring, I was in the vicinity of Mustang, in the southwestern part of the metro area, when I heard and saw a large number of flocks of Sandhill Cranes heading south, instead of north. This, I believe was because a winter storm to the north was freezing water there, maybe at the Platte River, a major “staging” area for the cranes in Nebraska. Flock after flock of cranes were coming back south, and I was seldom out of hearing range of at least one flock for several hours.

On another occasion Warren Harden, Jack Tyler and I were in the Black Mesa area of Cimarron County, Oklahoma—in October I believe it was—and nearly all day long we were rarely out of hearing of at least one flock of cranes headed south. Many flocks landed at a pond about a mile and a half northwest of the Santa Fe Trail crossing sign along the main road to Kenton. They were apparently landing there to feed and spend the night. We saw birds feeding on the adjacent prairie, but could not tell what they were eating. By the time we drove by the area the next day, every crane was gone.

Listen for the cranes, and watch for “trains” of cranes—many migratory flocks following one another.