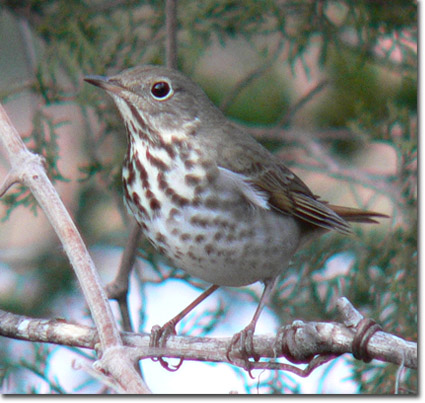 Maybe not for you, but Hermit Thrushes in central Oklahoma in winter just don’t compute right for me—and I like it. Growing up in North Carolina until my middle teens, I never expected to see our usual thrush—the Wood Thush—in wintertime: they should have been well south of the U.S. border at that time of year. Many years later now, I notice in the bird books that indeed I should have been able to find a Hermit Thrush or two in North Carolina in winter, but this was something that apparently escaped me at the time.

But moving to Oklahoma changed my perspective on winter thrushes—though not immediately. My first enlightenment came because of Mrs. J. E. (Irene) Martin, who was the spark plug of our society in the 1960s. Every year she rounded up a bus load—usually two—of people to go on a Thanksgiving Safari to Aransas National Wildlife Refuge along the gulf coast near Corpus Christi, Texas, to see the Whooping Cranes there.

One year we stopped at the Welder Wildlife Refuge, near Sinton, Texas, about an hour north of the Texas coast. There was a banding project going on there and one of their frequently caught birds was the Hermit Thrush. Humph, I thought—how strange. I don’t know how many more years passed before I realized that the Hermit Thrush, on rare occasions, even spent the winter in central Oklahoma, but I’m sure I learned this fact in relation to our Christmas Bird Counts (yes, Irene Martin was the spark plug for this undertaking as well.

Bent, in his Life Histories North American Thrushes, Kinglets, and Their Allies (1949, p.144) says that “[t]he hermit thrush is the heartiest member of its group…”. But it is not easy to find. Bent (p.153) further states that “[w]hile in its winter haunts of the Southern States the hermit thrush feeds largely on wild fruits and berries…,” then lists about any berry/fruit you can imagine in Oklahoma in winter. The list includes greenbriar berries and greenbriar thickets are woods where I often think “Hermit Thrush.” The thrushes make a “chuck” note and, when in view, tend to lower and raise their tail—assuming you get more than a second or two to watch for this behavior.

They are quite similar to the Fox Sparrow, but usually more wary, so you have to be a little careful in identifying them. It seems to me, and I may be wrong, that they tend to be found in early morning near water. I don’t know if they come to drink there, to eat greenbriar berries in the vicinity, or to catch insects near the water, but keep your eyes open to the possibility of this wintering thrush, especially early on count day near water.

The Hermit Thrush is one of a small group of very special birds to be found on our Christmas Bird Counts. Seeing one in central Oklahoma in the winter still jars me a bit—and always makes for a special day.