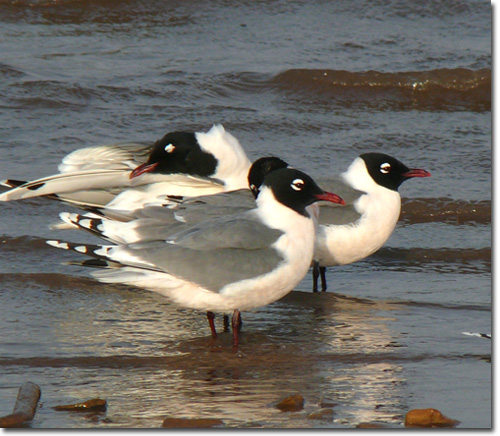 The Franklin’s Gull breeds well north of us in the northern prairie states and southcentral Canada—Saskatchewan and Alberta primarily—so it is definitely not a seabird in the breeding season.  It winters far south of us “on the west coast of South America, from northern Peru…to Patagonia and southern Chile…” (Bent. 1963. Life histories of North American gulls and terns).  A few winter as far north as the Gulf of Mexico coast in Louisiana.  According to Sutton (1967. Oklahoma Birds), the Franklin’s Gull comes through Oklahoma primarily “in mid-September to mid-November, and in April and May” (Sutton, 1967. Oklahoma Birds).  There are a few records of nonbreeding birds both in summer and winter, but these are exceptions, not the rule.

It nests in large colonies, and selects breeding areas where aquatic vegetation like reeds grow; to this and other aquatic vegetation it anchors its nests; the cup of the nest is above the waterline.   Because the nests are usually hinged to growing vegetation, this allows for the nest to rise and fall with changing water levels.  Sometimes these nests break loose from their mooring and will float out into deeper water, a situation in which nesting birds may well abandon the nest.  This gull lays 2-3 eggs, usually 3.

During springtime I once had a wonderful moment when I realized that 1 bird of a flock I was watching flying over had a very strong pinkish “bloom” on its white breast that made it stand out from the other birds in the flock.  For some reason I had failed to remember (or did not know) that at least some birds in breeding plumage could have this feature.  It was a very pleasant moment of discovery.  So as you watch these birds migrating over us in the next several weeks, watch for this feature—a pinkish bloom—you will enjoy seeing it.  And for some of you photographers, it would be a beautiful feature to try to photograph.  Flocks of this species are the ones that are very prone to follow right behind a tractor that is plowing a field, where the gulls eat up the worms and grubs turned up by the plow.

From “The Audubon Society Encyclopedia of North American Birds” (Terres, J.K. 1980. Knopf, New York) I found an interesting history of the naming of the Franklin’s Gull.  In 1832 one was collected in Saskatchewan, Canada, and given the names Franklin’s Gull (common name) and Larus franklini, (Latin name).  It was named after Sir John Franklin, an English explorer of the Artic.  But later it was discovered that the bird had first been described a year earlier, in 1831, from a site in Mexico and been given the Latin name Larus pipixcan.  Scientific protocol is for the earliest description to override later descriptions, so pipixcan it was.  The word pipixcan is believed to be an Aztec word implying Mexico.  The Latin name of this gull was thus changed, but the Franklin’s Gull common name survives.