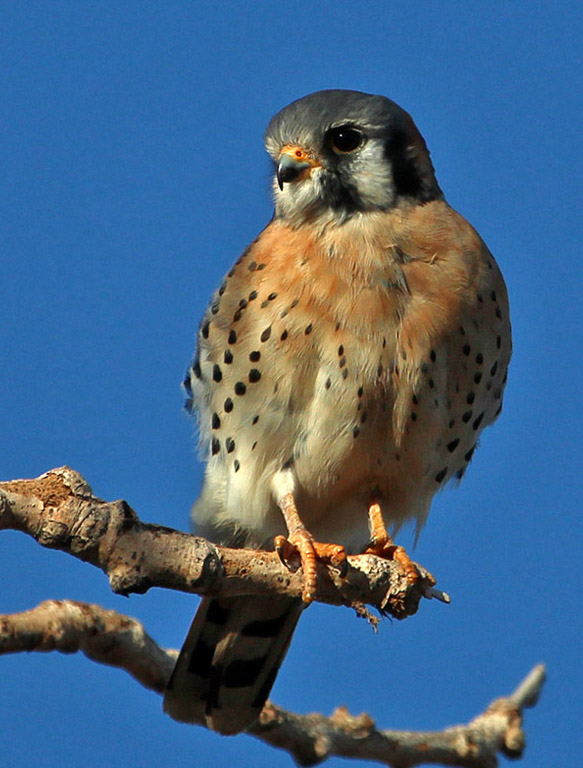 I think the American Kestrel (Falco sparaverius) has an interesting glitch about its name.  We used to call it the Sparrow Hawk.  When I started writing this article I assumed bird authorities had ruled that the kestrel in North America was a subpopulation of the European Kestrel, rather than a full species.  But this is incorrect:  the Eurasian Kestrel’s Latin name is Falco tinnunculus, and therefore the 2 populations are each full species.  In recognition of the American Kestrel being relatively closely related to the Eurasian Kestrel, ornithologists apparently decided to call it the American Kestrel, but if I understand everything correctly, it did not dictate that the American bird had to have the common name American Kestrel.  This is only a suggested name that ornithologists have apparently adopted, which is to say, if you want to call American Kestrels Sparrow Hawks, you are not violating any longstanding protocols of Linnaean nomenclature (which dictate that older names have precedence over newer names in subpopulations) although you might offend a few ornithologists by not conforming to their opinion of what to call it!  Sparrow Hawk!  Ah, the freedom!  I would love to hear from someone who knows more about this particular case than I — I realize I may well be out to lunch on this!

There are several things that make the American Kestrel a remarkable hawk species.  For example, and unlike most hawks, there are very noticeable color differences between the sexes:  the female has a reddish-brown dorsal (back) surface with barring down the back and throughout the tail, while the male does not have such barring, only a strong single, black terminal bar on the tail.  The male also has bluish-gray wings, unlike the female, with its reddish-brown wings.

I have read that the male kestrel, like most male hawks, is smaller than the female, but the difference is small enough that I personally do not normally notice this in the field.  It is speculated that such size differences, common between male (smaller) and female (larger) hawk species, may result in less overlap of prey size and possibly even prey base.

According to A Field Guide to Birds’ Nests (1975, Hal H. Harrison) the kestrel builds its nests in “natural tree cavities, old flicker and pileated woodpecker holes, man-made nest boxes, nooks, crannies in eaves of buildings, rarely in the open in old nests of other birds.”  It usually lays 4-5 eggs, but varies from 3-7.  Kestrels apparently bring in little, if any, nesting material to the nest.

When I think of the American Kestrel I almost automatically think of the Loggerhead Shrike too.  Both species essentially utilize the same prey items—insects, small snakes and lizards, and small birds, and one sees them in very similar habitats.  Populations of both species have had a downward trend in central Oklahoma since 1966.  In the Oklahoma City Christmas Count area, the kestrel still continues to show up—at least 18 were seen on this year’s count–while the shrike seems to have basically disappeared—none seen.  To continue to speak of the Loggerhead Shrike, one of the very best studies on the species was done by Dr. Jack D. Tyler, professor emeritus at Cameron University in Lawton and his paper was published in the Wilson Bulletin, the premier ornithological publication in the country.  In comparing kestrel nesting to shrike nesting, the shrike builds an open nest in trees, rather than nesting in holes like the kestrel.  Although Jack Tyler had no direct evidence in his shrike study, one hypothesis he has related to me is that the shrike eggs and young in the nest might be vulnerable to frequently being preyed upon by Common Grackles; kestrels would not be preyed upon so readily, being hole nesters.  Also, being a hawk, the kestrel might be a better defender of its nest from being preyed upon by other birds than the shrike is.

I found one interesting old reference to a kestrel/shrike interaction, from a long time ago. In the Sutton Summaries of Oklahoma Species [1982], Sutton writes:  “November 7, 1883, one [kestrel] observed chasing a shrike near Caddo (Cooke, 1914: 450)”.  (The name of W. W. Cooke’s article is “Some winter birds of Oklahoma.”  Auk, 31:473-93; Caddo is a town in Bryan County, Oklahoma, north of Durant).  From this one anecdotal incident the suggestion is that the kestrel may dominate the shrike in any direct confrontations, and this might even extend to kestrels not tolerating shrikes well in their territories.  The spacing between these 2 species in a particular area, as well as different spacing during different times of year, would be an interesting point for future observation/research.