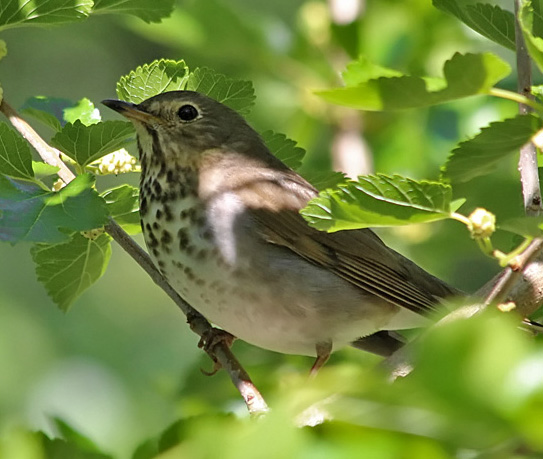 The Swainson’s Thrush (Catharus ustulatus) is strictly a migrant in Oklahoma.  Most of these thrushes spend the breeding season well north of us in Canada and into Alaska. Their wintering season is spent well south of us, in Central and South America.  Dr. George Sutton (1967; Oklahoma Birds) gives April 16 to June 6 in the spring and September 7 to September 29 in the fall as the dates to look for Swainson’s Thrushes in Oklahoma.

During spring and fall migration, it is the thrush I most often see.  Differences between several of the thrushes are subtle.  Besides the Swainson’s Thrush, there are the similar Hermit Thrush, Veery, and Gray-cheeked Thrush; all of these have brown backs and spots on the breast.  Perhaps the best field mark for the Swainson’s Thrush is its prominent buffy eye-ring. This is the thing that usually attracts me most in identifying the species.  They also show buffy on the sides of the breast and olive brown on the back. The Hermit Thrush is similar but differs by having a reddish-brown tail that is redder than its back. The Veery has less spotting on the breast than the other thrushes, a relatively plain face and an even brown back. The Gray-cheeked Thrush has grayish on the face and neck, and no buffy eye-ring.  One final thrush to rule out from the above four is the Wood Thrush. The feature that readily separates this species from the other four is very bold spots on the ventral surface that cover almost all of the throat, breast and belly.  Well, actually, there is one other thrush, but we do not need to worry much about this one—the Bicknell’s Thrush.  It is found in the breeding season in quite localized areas in New York State northward into eastern Canada.  It was fairly recently separated from the very similar Gray-cheeked Thrush—differences are mostly habitat and song, I believe.

Since we do not see this bird on its breeding and wintering grounds, I thought it might be of interest as to what goes on when we do not see the bird, in summer and winter.  In summer the Swainson’s Thrush usually nests in moist northern areas of spruce or balsam firs, other evergreens, but also poplar and willow thickets.  The nests are usually quite low, about 2-8 feet high, although they can be considerably higher.  They lay 3 to 5 eggs (usually 3 or 4) in a nest that does not use mud in its construction, as the Wood Thrush and American Robin do.

In winter, the birds separate out somewhat by 2 populations.  The first and largest—and our population—migrates to southeastern Mexico southward on into northern Argentina.  This population was formerly called the Olive-backed Thrush.  A second population I have not mentioned breeds along the west coast state south to southern California, and also southward in the Rocky Mountains as far as New Mexico; this population winters on the southwest coast of Mexico south to Guatemala.  This was formerly known as the Russet-backed Thrush.  There appears to be a gap between these two populations on the wintering ground.  This gap is in the middle parts of southern Mexico and extends southward a way.

So when you see a thrush in spring or fall migration in Oklahoma, think first of Swainson’s Thrush.  You will be right most of the time.