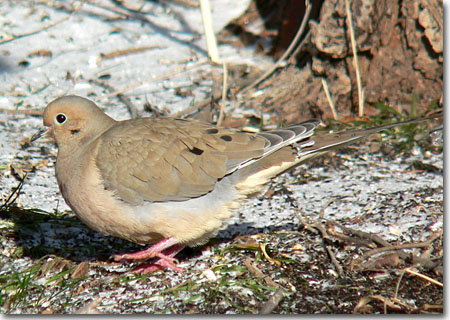 With Valentine’s Day just past, it seems fitting to discuss doves. The “dove and olive branch” is one of the most recognized symbols of peace. The origins of this symbol go back to the story of Noah and the Ark, when rain flooded the earth. After the rains stopped, Noah sent out various birds to see if they would bring back any sign of land. It was a dove that finally returned with an olive branch.

Our most prominent dove in Oklahoma is the Mourning Dove. Its name arises from its mournful cooing call. Usually this species nests fairly low in trees. Much about the Mourning Dove is peaceful—that is until you walk near an incubating bird and flush it from its nest. Then there is a heart stopping moment of loud wings and flutterings as the adult leaves the nest, not quite as “thrilling” as jumping a covey of quail, but a moment to remember nonetheless.

When I moved to Oklahoma as a teenager in 1958, I heard that some Mourning Doves in Oklahoma nested on the ground. I didn’t know for sure if this was true, or my leg was being pulled, because any self-respecting Mourning Doves in North Carolina—where I moved from—wouldn’t think of such a thing. But birding in the Oklahoma Panhandle proved the truth of ground-nesting doves, and I now find it very neat that out in the Panhandle where trees are not too plentiful, the doves have adapted by sometimes nesting on the ground.

Mourning Doves can nest several times during a breeding season, so even though the female usually lays only two eggs per clutch, a pair of doves might raise six or so young per year. Fortunately for the Mourning Doves they do not nest in colonies, so numbers of the species remain relatively high—even though they are fairly heavily hunted during the autumn. A close relative of the Mourning Dove, the Passenger Pigeon, was not so lucky. These pigeons, being colonial nesters—like most of the herons—were very vulnerable to colony decimation as man “hunted” them for food. Such “hunting” was probably the main reason for the demise of the Passenger Pigeon.

Feathers on a Mourning Dove are not attached too strongly, so trying to prepare a museum specimen is not an easy job (second-hand information). After that big ice storm we had in central Oklahoma before Christmas, several people wrote on the birdnet of seeing Mourning Doves without tail feathers. I suspect that the dove’s long tail feathers had frozen to their perching spots over night, and when the doves flew away in the morning, they left their tail feathers behind. But these tailless birds seem to be able to fly just fine, and the feathers do grow back rather quickly.