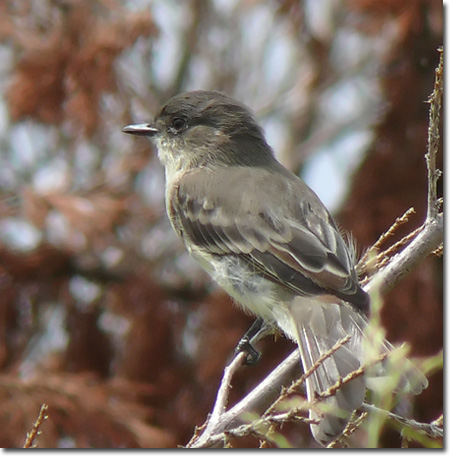 The promise of spring comes in a number of ways—the first dandelion bloom; a scratch of henbit; an unusually warm, balmy day, perhaps with the threat of a tornado; a bluebird checking out a nesting box; a flock of Sandhill Cranes overhead giving their wonderfully eerie call on the way northward; a blooming breath-of-spring bush with its sweet aroma and a honey bee or two. All of these hints of spring arrive before the first tree leaves come out.

One of the most pleasant signs of spring is the arrival of the Eastern Phoebe. Somewhere in our individual worlds, we begin hearing its call—phoe-be, phoe-be—and see the bird, perhaps around the eaves of our house or at a nearby culvert along a stream. Then we think: Oh yeah, spring really is on the way.

Adult phoebes are about 7 inches long and drab of plumage, off white below and grayish above, the head being a darker gray. There are no wing bars or eye rings. It is quite similar in plumage to many other flycatchers, but it has an identifying behavior—it wagging its tail up and down regularly. A. C. Bent, in his life histories of North American birds series, says “[f]ledgling phoebes are…prettier when they leave the nest than they will ever be in their lives again. They are not dingy like their parents; their backs are pale olive, and their wings are crossed by two distinct buffy bars.”

Phoebe populations have done well as a result of man spreading across the landscape. We have created many nesting places for it. Bridges, culverts, barns and out buildings, eaves around houses, and so on. Bent has the following to say about the phoebe and man. “The phoebe has lived so long and so familiarly in our farmyards that we have come to look on it, not as a wild bird, but as a member of the happy community that makes up rural life—the pigs in their sty, the hens in their coops, the horses and cows in the barn and the phoebe in the back shed. Busy all day catching insects, unobtrusive, never noisy, it is popular with the farmers. They all know the phoebe as, over and over, it calls out its name.”

The phoebe lays 3-7, rarely 8, white eggs in its nest, a nest that usually includes mosses in the outer layer. Only females incubate the eggs, but both parents tend the nestlings. The nests are frequently parasitized by the Brown-headed Cowbird.

Bent reports that the phoebe was the first bird to ever be “banded,” and this by no less a person than Audubon himself. Audubon spent a lot of time studying a nesting pair in Pennsylvania. When the young were about to leave the nest, “I fixed a light silver thread to the leg of each, loose enough not to hurt the part, but so fastened that no exertions of theirs could remove it.” The following year, in studying the phoebes nesting along the same creek and its surrounding meadows, “I had the pleasure of finding that two of them had the little ring on the leg.”

The heartiest phoebes winter not far south of Oklahoma, and we usually even have one or two on our Christmas Bird Counts. But these are not the phoebes we think of as “our” phoebes. Several days ago I saw a small bird flit across the road near a culvert in our area. I thought of phoebe. Maybe it was, maybe it wasn’t. But two days later the phoebe that nests about our house was calling in the yard. The phoebe is back, so here comes spring!