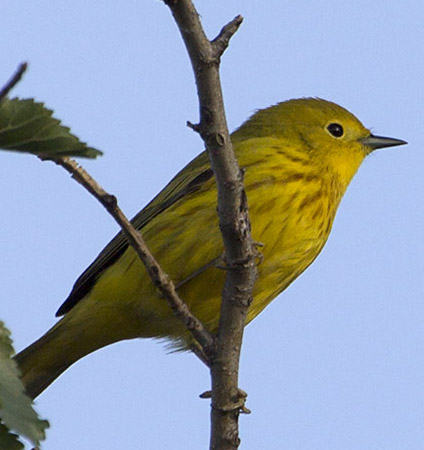 The Yellow Warbler (Setophaga  petechia) has recently undergone a Genus name change, from Dendroica to Setophaga.  All warblers in the Genus Dendroica, which had encompassed some two dozen species, have now been placed in the Genus Setophaga, along with several additional warbler species not in the previous Genus Dendroica.  This scientific name change was based primarily on recent DNA studies of the birds in question.  One conclusion of this recent research that I found interesting is that the Yellow Warbler is more closely related to the Chestnut-sided Warbler than any other warbler.

Within the new Genus Setophaga, the Yellow Warbler is the most widespread.  Its breeding range covers most of Alaska and Canada and about the northern two-thirds of the United States.  Its range also goes far into Mexico in the Sierra Madre Occidental Mountains.  There is even a non-migratory breeding population that is as far south as the Galapagos Islands, off the coast of Ecuador.  Males of this population in the Galapagos differ from males elsewhere in having a quite striking reddish-brown crown.  Also the Galapagos population differs in foraging habits by often hopping along an oceanic beach feeding on small insect prey and the like that it finds there; other populations elsewhere usually flit among trees at mid-levels, searching for insects.

According to Bent (1963, Life Histories of North American Wood Warblers, part 1, Dover Publications, Inc., New York) the Yellow Warbler lays 3-6 eggs, most commonly 4-5, and usually nests about 2-12 feet above ground in the upright crotch of a tree, briar or shrub.  This surprised me because in Oklahoma, both at Lake Hefner and in the Black Mesa area of Cimarron County, I had usually observed the species high in tall cottonwoods during the nesting season.  This discrepancy between my observations and Bent’s information made me wonder about my abilities as an observer on this point:  I was therefore relieved to read, later in Bent’s discussion of nesting, that Yellow Warblers are known to nest in cottonwoods “at heights of 40 and 60 feet.”

The Yellow Warbler has an interesting strategy to try to thwart nest parasitism by the Brown-headed Cowbird:  It is known to build a new nest on top of an original nest when a cowbird egg is laid in the original nest.  Up to 6 “stories” of nests have been known to occur at a single nest location.

Dr. George Sutton (1967, Oklahoma Birds), in his account of Yellow Warbler nesting in Oklahoma said that “Distribution in summer puzzlingly spotty and southern limits of breeding in Oklahoma uncertain.”  Recent Breeding Bird Survey data show that the Yellow Warbler is found primarily in the northeastern one-quarter of the state, but not in the Oklahoma City area.  I suspect the cowbird may be at least a contributor for part of the puzzlement that Dr. Sutton mentions:  Oklahoma, generally speaking, has fewer and fewer trees, moving from the eastern part of the state westward through the Oklahoma Panhandle.  The sparser vegetation as one moves westward in the main body of the state probably makes it easier for cowbirds—when present—to find nests to parasitize.

My recollections on this warbler in central Oklahoma go way back.  For a year or 2 in the early 1960s, not long after I had moved to Oklahoma, I used to see a small population in summertime—thus breeding birds—in large cottonwood trees that could be found below the dam at Lake Hefner.  Neither the cottonwoods nor the birds can be found there now.  I suspect the small population was erased by the activity of Brown-headed Cowbirds. Nesting in tall cottonwoods at Lake Hefner may have tended to keep cowbirds at bay longer than nests built lower in vegetation, where cowbirds usually tend to deposit eggs, but I suspect the cowbirds finally won out.