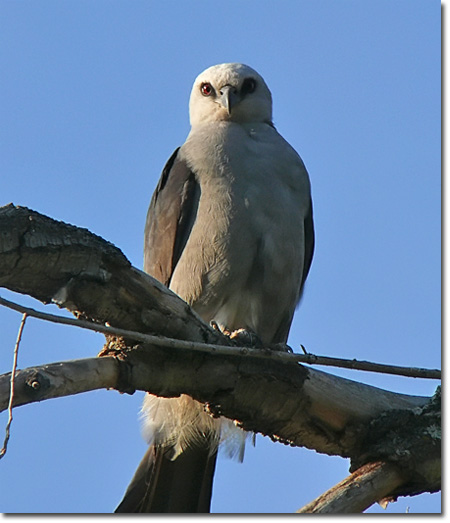 The Mississippi Kite is a nesting bird in Oklahoma, one of the late returners from its wintering grounds to the south. May is the month I associate with this kite becoming a common sight in the western two-thirds of Oklahoma. We have the best state bird—the Scissor-tailed Flycatcher—of any state, but I also think of the Mississippi Kite as one of Oklahoma’s special birds. The thought crossed my mind that this kite might make a good state bird, if we didn’t have the Scissor-tail. My wife pointed out a major problem: the MISSISSIPPI Kite as the state bird of OKLAHOMA? I don’t think so. O.K., it was just a thought. The Mississippi Kite is so named because the type specimen was collected in Mississippi. (I think a type specimen is the first of a species to be collected and described scientifically.)

This kite is rather colonial. They may be common it one spot and nearby, in similar habitat, be absent. In my neighborhood the kite is common. We live in a post/blackjack oak area with much of the undergrowth being lawn rather than shrubbery. It’s fun to see the kites wheeling about in the air on a regular basis. I have counted up to 16-18 of them at one time, but these high counts were likely augmented by young of the year. One pair nested in an oak in our front lawn more than one year. The nest was in an oak that was slowly dying. Recently we cut this tree down for safety reasons, but I’m confident the kites will find another spot nearby. The kite is also often reported to be found near water, and there is a small pond in our neighborhood that also may help attract the kites.

Food the kites eat is usually insectivorous. Early reports from Bent, etc. on its food usually mention cicadas and grasshopper, but dragonflies seem to be a common food item now. The birds will catch an insect in the air, pluck the wings off the insect, and eat the body—all while continuing to fly in the air. They take a few other items such as lizards or mice on rare occasions, but usually do not prey on other birds. I think one of the rare reports of this happening was reported from northeastern Oklahoma. If I remember correctly, Vicki Hatfield found Chimney Swift parts in a kite nest or two in that part of the state.

The kites are usually rather retiring, but they are aggressive protectors of their nests. They can be defensive enough to actually strike a person close to the nest, but usually they just “buzz” someone closely. Although I have not heard of any problems recently in the Oklahoma City area, back a number of years ago there would be a report in the paper almost every year about golfers at the Oklahoma City Golf and Country Club being “attacked” on the fairways. Of course the kites were just defending their nests and young nearby. Apparently biologists finally were heard on the subject and the crisis appears to have passed (I think a few kite eggs may have been transported from the golf course to other nests not in the immediate area).

The Mississippi Kite is not an easy bird to photograph. The reasons are that there are light and dark areas on the bird which are further compromised by the sunny days of summer, when the sun usually serves to cast shadows. Cloudy days are usually much better for photographing, but these are rare in Oklahoma summertime. I’m looking forward to seeing if photographers using digital cameras are more successful than non-digital photographers, as the Mississippi Kite is a very handsome species.